Posted on September 6, 2016 by Van Rockingham — Leave a comment 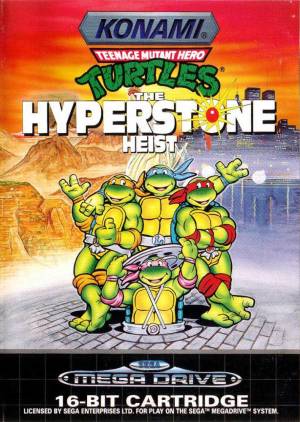 Developed at the same time as the console version of Turtles in Time, Hyperstone Heist borrowed a number of features from it’s SNES counterpart to make a fairly solid beat ’em up on the Megadrive.

But, does that make it a clone? And more importantly in the 16bit wars, did the Genesis do what NintenDon’t?

Hyperstone is a side scrolling beat ’em up in the vein of Golden Axe or Streets of Rage. You walk left to right, and punch things, all in the 80s/90s cartoon universe of the Turtles..

You choose between the 4 Turtles, each with a slight difference: Leonardo is the all rounder, Raphael is speedy, Donatello has greater range, and Michelangelo does more damage. You’ll notice the differences when playing, but, you will probably end up picking the Turtle character you prefer regardless of their stats.

At the end of each level you’ll fight a boss, and these are made up of SOME of your favourites from the cartoon; Rocksteady, Letherhead, Tatsu, Baxter Stockman, as well as Krang and Shredder are featured. If you know and love the cartoon then you won’t be *that* disappointed by the roster, but if you have played TiT you might be. 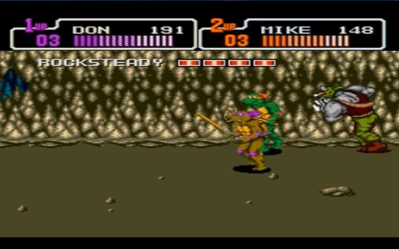 Urrrm, there is somebody missing from this fight

Errrrm, Shredder steals  Manhatten by shrinking it using the Hyperstone, a powerful relic from Dimension X, the Turtles set off through New York to get the city back.

I’ll be honest, the story doesn’t really make sense, but it makes as much sense as any Turtles TV episode, so it isn’t anything to worry about.

Side by side comparison, and pretty much same cutscene

As the two games were developed at the same time, a lot of assets were shared. Thankfully, this didn’t mean Hyperstone was a complete reskin/clone of TiT.

TiT could become hard if you didn’t pay attention, or if you couldn’t throw an enemy at Shredder. Hyperstone is very much the same, minus the throwing enemies. But one crucial difference is the length of the levels. There are only 5 levels, and level 4 is a gauntlet of bosses. For me, this is where the game shows its inferiority. 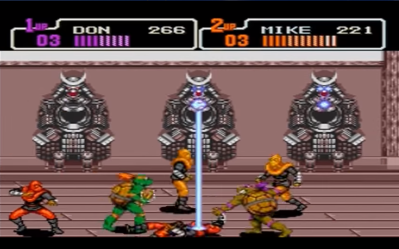 In Hyperstone it drags because levels are simply too long. There are 5 levels, but the game is the same length as TiT. TiT also had a nice flow, it never dragged (unless you’re shit) and every level was unique. Hyperstone reuses most of the level design from TiT, but everything is kinda of pasted in, so often feels a little tacked on.The Pirate Ship is palatte swapped to a ghost ship, and levels look different but on the whole they are all thrown together. The first level of Hyperstone combines 3 of TiT’s levels, but with one boss (Leatherhead [same fight as TiT]).

Level 3 and 4 are completely new levels, and 3 features a boss fight against Tatsu: Shredders right-hand man in the movies. But level 4 is a reskin loop of the cave sections from level 2, plus a boss gauntlet. I dislike boss gauntlets at the best of times, and in Hyperstone it very much felt like padding, though you do get a boss fight with the Human version of Baxter Stockman and his mousers at the end of the gauntlet, which is a slight plus to the level.

The final level, really is too long. On a good run, it is 10 minutes long, and considering the game is around 30 minutes, it aptly demonstrates how disproportionately long the final level is. The Technodrome bits loop too long, there are too many levels in the elevator, the mid stage fight vs Krang is a bit unfairly paced, all before finally fighting Shredder in the same Red/Green/Blue boss fight as TiT.

Other than that, the standard enemy roster is the same, but the same coloured enemy do a different thing to TiT, this isn’t a bad thing, but it will take a moment to get used to if you play one after the other.

Hyperstone is pretty much the same game as TiT so the fighting remains tight and fun, and they are equal in difficulty; though Hyperstone will appear harder due to length of levels.

The levels are the big issue in Hyperstone, there simply isn’t enough level variety to break the game up, meaning monotony can set it. As it is, Hyperstone just isn’t as good as TiT. It is still an enjoyable game, but the lack of level variety and the level length mean that side by side comparisons of the the two games makes Hyperstone come up short.

Pros: Mikey is the best Turtle, 2 player mode is fun