I struggle with the Fallout series; with Fallout 1 it felt like it should be a good game, but it was broken in too many places. Fallout 3 thought that 15 hours of tunnel schellping was a fun thing, and was a fairly solid 7/10 game. But with Fallout 2 I finally understand why it is such a beloved series.

After the events of Fallout 1, the Vault Dweller is banished from his vault. He sets off, and eventually founds a small clan way way north (Arroyo). The game starts with you, the Chosen One tasked with finding the Garden of Eden Creation Kit (G.E.C.K) to save your village. You are sent into the wastes with only your newly acquired pip-boy, a vault-13 jumpsuit, and a spear.

40 or so hours later you find the G.E.C.K, and go home, only to find you’re village has been enslaved by the Enclave. You then spend the last 2-3 hours of the game killing the former United States government.

Fallout 2 mixes turn based strategy with real time movement. If you’re in combat, you move in turn based mode. If the area is clear, you’ll switch to real time. It is easy, and it is simple, and thankfully the transition between turn based and real time has been improved over the slow transition in Fallout 1.

I totally borked my first Fallout playthrough because I got my S.P.E.C.I.A.L stats wrong, so here I pilled everything into Agility. You are almost expected to do the first hour or so of the game in melee mode. Unlike Fallout 1, your stat choice is much more forgiving in that, if you roll wrong, you won’t get out the starter cave. Whereas Fallout you can get towards the end and get stuck.

Why Fallout 2 is a much better game than Fallout 1

So in Fallout 1 I had many issues and I found a lot of them to be game breaking. As I don’t expect you to read that review too, I’ll recap:

Levelling was a pain. It took hours to level in Fallout, and there wasn’t really much scope for grind. In Fallout 2 enemies provide more EXP, and quests give you significant EXP boosts as a reward for completion. It meant I was able to get to mid 20’s level on my playthrough, whereas in Fallout 1 I finished the game on level 11, meaning I missed out on all of the latter perks.

NPCs blocking you in. This broke my Fallout game. You could get stuck in a tight space an your NPC blocks the exit. This will require a complete reload. Fallout 2 adds a “MOVE YOUR ASS” button. This fixed a serious game breaking issue that caught me out a few times.

Karmic Choices were overly vague. Some of the choices are a bit vague, but on the whole, it is obvious what is a bad/good karma choice.

The User Interface sucked. You can now buy stuff and not spend 10 minutes manually typing 999 30 times to get to the amount you need to spend. Now you can just type 29970 and be done with it. Equipping your companions, isn’t the best, but it has been improved, and doesn’t require you to pickpocket them.

Game Length. Fallout was pretty short if you knew what you were doing, and while you can breeze through Fallout 2 if you know what to do, the game is still 50+ hours as there is SOOOO much to do. Each town/settlement will have around 7-10 quests, and there are around 10 main settlements. Fallout 1 was long because it was hard to identify what you’re supposed to be doing.

Fallout 2 Wasteland Map for the sake of having a wasteland map.

Being instantly murdered. This is still an issue in towns when interacting with guards, that bitch Lynette, or shagging the mafia bosses, but I rarely got instant gameover from overkilling enemies. Except for the Enclave.

Broken Save Files. I didn’t have any save issues on my playthrough. The only times I had issues were when I had saved at the wrong moment, and required a reload from an earlier backup. The one thing Fallout taught me was have a 3 save rolling back up… Though, if you are new to the game, save BEFORE  a conversation. Some conversation paths are one offs, and sometimes the guard will shoot you in the face for little reason.

Pixel Hunting. OK, you still need to hunt the pixel you need to climb ladders, but it isn’t *as* bad anymore. You have a slightly higher radius to choose the item you want , and this prevents the frustration of having to run backwards and forwards trying to find that damn pixel.

So while some of the features I really didn’t like remain, they have been refined to a point where it doesn’t feel broken. 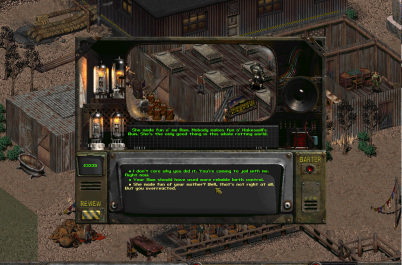 I will love you long time if you understand this passage!

There are two big negatives to Fallout 2:

Fallout 2 is a brilliant game, but the endgame will ruin it for many. The only way I was able to beat the game was to cheese my way through, stimpack assassinating the president, and nuking the reactor. There are some bugs, and you need to have NO COMPANIONS. The Gatling Turrets and Troops will attack all companions except dogs and the Security Bots will attack you if you have a dog in your group. It took me 10 hours of attempting the Rig to finally figure out the Cyberdog was what was pulling the entire base.

So my advice to you, kill the dog, put the bastard to sleep. Then go to the Rig. Leave Marcus and anyone else left in the main lobby. If you have Power Armour on nobody will attack you unless provoked.

With Mentats, I had 10 perception, and still wasn’t able to beat Enclave troops, they would always get 2 turns at the start of a battle, and kill me.

People can clear the Oil Rig, but if you are planning on killing EVERYTHING you really need to figure out your stats early and plan those perks correctly for a top build, otherwise you’ll be destroyed in a blink of an eye.

There is much more replayability in Fallout 2 than there was in Fallout 1. Everything you do has different options or ways of approaching a problem. The different skills make a massive difference in what companions you can attract, and there is always the ability to face-tank the whole thing, and murder all the enclave. 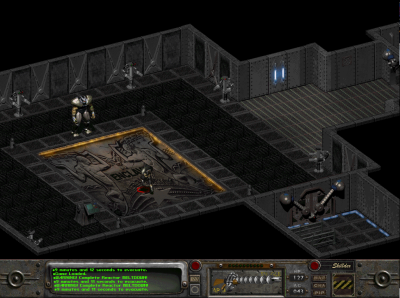 Considering how hard the Oil Rig can be, Horrigan is pretty easy.

My stats at the end.