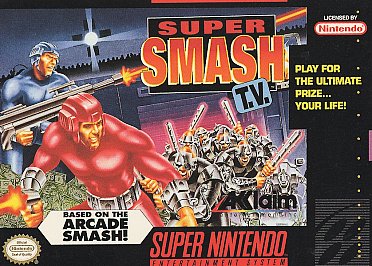 In a rare twist I am going to review the same game on two consoles resulting in two scores.

I never played Super Smash TV in the arcades, but I get the feeling you really needed the dual d-pad controls to get the full experience, but here I am with two home ports of varying quality.

SSTV is an arena run and gun, you’re inside a TV studio, and you run and gun. Simple. Unlike other run and guns, such as RoboCop vs the Terminator or Metal Slug, all the action takes place on one screen at a time, you fight wave after wave of enemy, then proceed to the next screen. It is fast, hectic and fun.

Along the way you get power-ups of varying use, and one hit results in Instadeath.

I’d buy that for a dollar!

The game is hard, one of the hardest I have played (and beat). However, unlike many games of this era, it doesn’t feel unfair. You are required to put some practice in, but when everything clicks, and you’re in the zone you will find yourself snaking in and out of hordes of enemies spraying bullets in all the right directions.

When you fail, it is usually you failed to react correctly, and either shot the wrong way, or boxed yourself in. This is where the two consoles differ most.

The Megadrive only had 3 button support, this gave you:

The lack of ability to quickly (and efficiently) change the direction you shoot in makes the game next to impossible. It isn’t a “bad” port, just the lack of decent control support makes shooting and running very hard.

The item pick ups are better on the Megadrive version, some of the item indicators are a little unclear on the SNES, and the Megadrive seems to be able to support less enemies on screen.

The Megadrive also has less variety in enemy type. 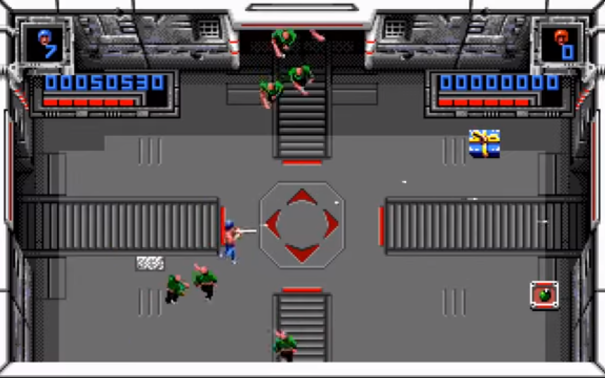 It might not sound much, but the controls really make or break this game.

On the SNES version your man looks like he is wearing an orange jumper rather than being topless.

The pacing is off on the bosses. They are hard, which is fine. But they take 5-10 minutes to beat, and they stop being fun. After a couple of minutes they start to drag meaning a significant portion of the game is a bit lame.

7 stages of the first boss, 8 if you count the two gunners…

This is one of the problems with SSTV. When you’re playing, you can feel the ebb and flow, but on a few screens you can feel that section should have ended earlier.

It is impressive how many enemies you’re able to get on screen, and the variety is fairly impressive too. SSTV does a good job of mixing the enemies up, and when you hit you’re stride, SSTV has a habit of switching it up on you. This makes the game tactical, and means you can never become complacent.

MegaDrive has less enemies on screen!

However, after 15 waves of the same enemy, you’ll get another 15 of the same. It does mean the game does drag, and it will certainly be repetitive.

SSTV is a really fun game, it isn’t going to entertain you for long periods but you’ll have a blast for a few hours.

The game is shortish, with only 3 levels and 4 bosses, but this will take you an hour and a half to clear. Also, if you get enough keys you can unlock a secret ending, and two player mode you’ll add a lot of replayability.

The controls for the Megadrive make it almost unplayable. I can complete the SNES version, I can’t get off the first level of the Megadrive version.

Other than the controls, there isn’t really anything different about the games. It is just a shame the controls break the experience a lot.

Pros: SNES pad works as well as you could hope, snappy one liners from host. Boss battles are sufficiently epic