The Legend of Zelda: The Wind Waker. Nintendo EAD (2003) Gamecube 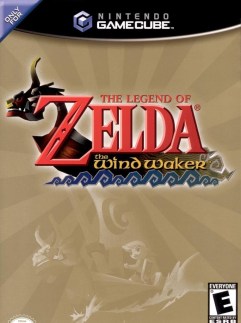 Wind Waker has always been a strange one for me. I can remember the faux outrage over the cartooney graphics, and I can remember getting bored of the game around the plot twist. So originally (in two attempts), I never completed it.

Fast forward 13 years however and there are many MANY things which make Wind Waker my favourite Zelda game, but then, there are also a few things I take umbrage with.

Wind Waker is the “3rd sequel” to Ocarina of Time. It is set after OoT, but assumes the “Adult Timeline” after defeating Ganondorf.

Years after the events of OoT, Ganon reappears and since Link is nowhere to be seen, the gods of Hyrule flood the land. Enter “your” Link several centuries later.

The game starts with Link “coming of age”, his sister is kidnapped and off you go on your merry way restoring order to The Great Sea.

LINK HAS A PERSONALITY!

One of the reasons I like Wind Waker is that Link FINALLY has a personality. He also has a motivation other than “you’re the hero of time, off you go to rescue the Princess”. 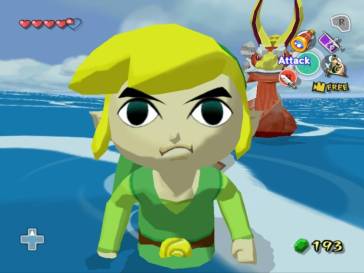 In Wind Waker, your Link is emotionally invested, his sister (Aryll) is kidnapped, and you are trying to rescue her. The story obviously develops from there, but the game has character development, which most Zeldas lack. The cartooney style also allowed the animators to add facial expressions, which is a nice feature. It means your Link is less of a gormless, ninja grunting, blank canvas and more a hero you can believe in. 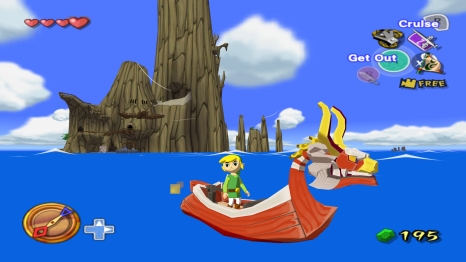 I’m on a boat motherfucker!

Wind Waker is by far the easiest Zelda game I have played, I completed the game and didn’t die once. I’m not talking Game Over screen, I’m talking “didn’t use the one fairy I caught at the start of the game” level of not dying. The dungeons are easy, the bosses are easy, and the puzzles are easy. You can get stuck on a boss, but hearts will spawn constantly around the room from mobs or pots.

I didn’t even need to collect the Heart Pieces, I completed the game on 11 hearts.

There are not many of them, so you learn to savour them when you get there, and as a result I really enjoyed the dungeons. It is the first Zelda since Link to the Past where you felt like an explorer. You don’t need to scour every room, you don’t need every chest, or even enter most rooms.

You are rewarded for exploring, you are rewarded for putting in the extra effort. A major flaw in OoT and MM was that you had to go in every room, flick every switch, open every chest. It doesn’t feel like exploring if you HAVE to do this, it is checkboxing. In Wind Waker there are only 2ish doors in each dungeon that need a key, the rest are secret areas with trivial bonuses in, like extra Rupees, or Joy Pendants.

Wind Waker is also the first Zelda game to use game mechanics that don’t start to drag. When I got to the Tower of the Gods, I thought to myself “Not another fucking Water Temple”, but the rising tides and water based shenanigans were only present for the first third of that dungeon. You get to a certain point, and it just stops, and it is great.

The Earth and Wind Temples, again, they have companion mechanics, but they are not over used. The one issue I have here is that you do need to use the Command Melody over and over in these temples. But the temples are all really well designed, and there isn’t any OoT Water Temple moments of frustration, or Oracle of Ages bad design. In OoT when you go to Jabu Jabu’s belly and you have to carry Princess Ruto it is really annoying, in Wind Waker at least the companion adds to the puzzling. The companion aids you, Ruto was just a bitch.

Ganon’s Tower/Maze was also fun, it is also relatively short. The first section, where you re-kill the 4 bosses was OK, but the stages before hand were a little contrived. It seemed a little unnecessary to force you to do Iron Boots puzzles again. But the Maze part was awesome and was a nice ode to Link’s Awakening.

I mentioned Wind Waker is on the easy side, but that is because Wind Waker is very good at signposting where to go. You rarely get stuck because of obtuse descriptions, or puzzles. Be it your map being marked, or feeding bait to the fish. You are usually told where you need to go, and more often that not, the fish in an area will tell you the crucial information about  the particular thing you’ll be after. 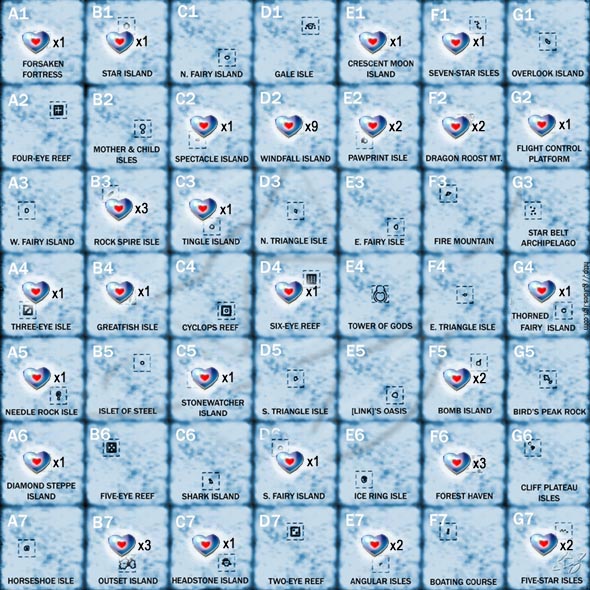 I touched on this in the introduction…

Right, Tingle. Fuck this guy. I rescued the little prick from a prison. Why the fuck is he charging me 398 rupees to read my Triforce charts? I have 8 of them, that is 3184 Rupees, KOOLOO-LIMPDICKED BASTARD!.

I didn’t get the Giant’s Wallet at first, so when I got to this bit, and discovered I had to spend all my money on him I was fucking livid! I had maxed out the 1000 rupee ages ago, as like all Zeldas, you rarely need to spend money once you have it. This led me to 3 hour grinding, both getting the Giant’s Wallet, and doing 3 runs of the Savage Labyrinth. I’ll be honest, I hated this bit. I hated it in Dead Rising 2: Off the Record and I hate it in Wind Waker. There are not many things more flow breaking than forced money grind sections.

The Wind! I like the sailing, but after a while it becomes a chore. Especially if you are looking for the fish and then need to head to an island the other way to the wind. It isn’t game breaking, but it is time wasting, and vexing enough that you will refuse to change the wind, with you crawling forward at a snails pace to retrace your steps. This is fixed in the WiiU Remaster, but in the GameCube version, it is a bit annoying.

Fishing for Treasure, I like the fishing for treasure, but in small doses. It is annoying that the glowing marker disappears as you approach. I know you can switch to the chart view in your maps, and line up your position, but this is a bit of a pointless faff. It needlessly draws out the gameplay, and personally, I feel it is bad game design. This could have been sped up by either the glow not disappearing, or the glow only appearing if you have the chart. 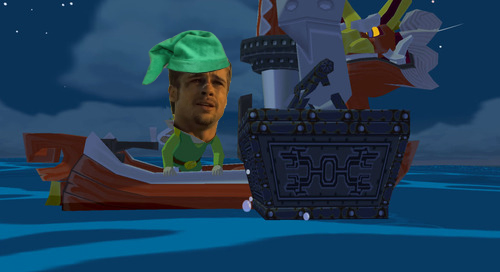 What’s in the box!

The first visit to the Forsaken Fortress. I HATED this section the first time I played. I gave up, I hate forced stealth sections in games (unless it is a stealth based game). And for this to be the first “dungeon” it is pretty brutal. You probably won’t die here, but you will keep getting sent back to the start while you figure out what you’re supposed to do.

Beedle. Fuck Beedle and his shop of SHIT! 1) How am I supposed to know I need Hyoi Pears for a Triforce piece? 2) How am I supposed to know which fucking Beedle shop sells them? I spent a  bad hour sailing between them until one either spawned the item, or the location determined they were sold there. WHATS WORSE, I failed the sodding Seagull switch hitting twice and had to go buy more… I was SOOOOOOOO angry!

SPOILERS FOR A 13 YEAR OLD GAME

Tetra is pretty badass. I really liked her, she was a strong female lead and the winks to camera were endearing. When the not totally shocking twist occurs, and Tetra is replaced by the Princess, it is all a bit “meh”. She is all of a sudden reduced to “go away and hide”. She had been badass for the first half the game, but now she is the damsel in distress. However, the final fight with Ganon tips this all on its head, and Zelda becomes pretty badass again. So while I would have liked her to play more of a roll in the final third of the game, she does make up for it in the final boss fight.

I like them. I really do. As much as I like OoT, the N64 version looks like shit smeared in Vaseline. Wind Waker still looks good, I don’t think the HD remake has added much (better textures and bloom), but obviously it looks a little better.

Its a Zelda game so you should know what to expect, 2-3 new stand out songs, and variations on a theme. The Forest Temple’s music has a nice link to Saria’s Song, Dragon’s Roost is pretty cool. Overall the music is solid.

One other thing that is worth noting, is that the King of Red Lions is a nice feature. This is your boat, and you find out later he is important to the story. The boat has a personality and joins in with the adventure. He isn’t like the owl in other games, just turning up and saying “Look… there are clouds over there, go there”, the boat adds something, and does a good job of keeping you company on the long sailing sections.

For 70% of the game Wind Waker is my favourite Zelda game, and if you can look past some of the flaws I have listed, you can add some points to this score yourself.

However, due to having to pay to have your charts read, and the 3 hour grind thay entailed, I have to dock a few points off the score. The changing wind is a little tedious but you can get over it, same with the other negatives. But man, Tingle I hate that.

Overall, a great game and my current second favourite after Link to the Past.

Pros: The music, and in particular Dragon’s Roost Theme, Link has a personality, Link has a purpose, Dungeons are fun to explore, and exploring is optional.

Cons: Tingle being in it. Tingle charging 398 Rupees PER CHART, Having to faff with the wind, fishing for treasure, Hyoi Pears!

2 comments on “The Legend of Zelda: The Wind Waker. Nintendo EAD (2003) Gamecube”