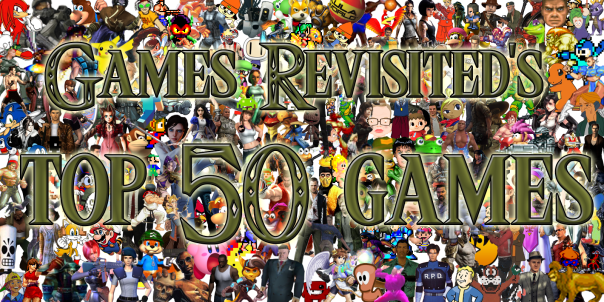 To celebrate our upcoming 2 year anniversary, we have put our heads together and come up with a TOP 50 games list of games we have featured since launch.

Don’t be offended if your favourite game doesn’t feature!

One of Matt’s wildcards, still offers excellent multiplayer. Wouldn’t be unfair to call this an homage to GoldenEye, as it was essentially the same team.

I love Cannon Fodder, the humour is just right. However, the insane difficulty curve means most won’t get past Mission 8 (out of 24) (Full Review)

Do you remember that football games were made for the fun of dicking around and just playing football? That is Sensible Soccer, it isn’t going to give you realistic simulation, but you’ll have a laugh playing. (Full Review)

It is hard to wax lyrical about TJ&E, this Roguealike RPG didn’t make much sense in 1991, and it still doesn’t. Great game though. (Full Review)

Very simple platformer by Capcom. So, great music, decent platforming, but a bit on the easy side. (Full Review)

Simply put, this is a better racing game than Mario Kart. The single player is immense, and while perhaps the multiplayer isn’t as good as Mario Kart, there is more meat to the bones in DKR. (Full Review)

Angry gamer nerd rage activate, THIS ISN’T RETRO! No, but it is still as good as it was when released; so it is accepted. (Full Review)

What happens when you combine isometric graphics, 16bit Heavy Metal, and the gameplay of Micro Machines? You get a great game, that’s what. (Full Review)

What do you do when you’re Capcom and you get called out for making a Resident Evil clone in Dino Crisis? Well, you do a sequal that is pants-on-head retarded with a shooting combo system that is fun as hell to play. (Full Review)

When the Dreamcast wasn’t drowning us in arcade conversions and tournament fighters, Sega managed to sneak out the occasional brilliant Unique IP. Just like the console itself, Jet Set Radio would have sunk without a trace if it wasn’t for a decent cult following. (Full Review)

PB1 was fun, PB2 wasn’t. PB3 was a return to form that should have reinvigorated a dying series. It didn’t. (Full Review)

Still hard as hell, still can’t get past the 4th level, still love playing and failing at it. (Full Review)

I can see your piss boiling at the inclusion of this, but it fixed the bugs and failings of 1 and 2. It avoided feeling like overpriced DLC, and Capcom remembered that maybe a game set in a fake Las Vegas with millions of ways to kill zombies should just focus on trying to be fun. It was fun. (Full Review)

Just look what this game spawned! We couldn’t have a top games list without it! (Full Review)

Again, a sports game that was designed for fun over simulation. Great game, and fucking hilarious! (Full Review)

We prefer the Genesis version. Also one of 3 games based on a film that is actually any good. (Full Review)

Just like Civilization, but better. No tedious Stone Age to slog through, and more depth than the Mariana Trench. (Full Review)

OK, the AI is shonkey, the multiplayer is dated, and the graphics are atrocious. But GoldenEye is still bucket loads of fun. Except when you play against Claw on Bunker with Remote Mines. One of Jamie and Rob’s wildcard

Stupid weapons, and nothing is more fun than fucking your mates over once you have mastered the ninja rope, or Super Sheep! (Full Review)

This was Konami at it’s best. Enjoy 90 minutes of gameplay and 16 hours of reading/cutscenes. Seriously, it is fun, honest. (Full Review)

Having a Lawyer/detective sim where the tiniest details matter might not sound like fun, (‘um – yes it does’ – Craig) but as we mentioned, we like Capcom. (Full Review)

Alright, we prefer this one. It’s better than 1, and we haven’t done 3 or Knuckles, and we didn’t want to waste a wildcard on those. Plus, every game after Knuckles sucked balls. (Full Review)

Matt’s other wildcard. This is made better by the hidden NES games, but as open ended creepy simulation go, it was pretty good.

Point and Clicking at it’s finest, and minus most of the obtuse puzzles of games like Monkey Island. (Full Review)

Newest game on our list, but thankfully plays like an old school Point and Clicker. Well written, and is the perfect example of episodic gaming. (Full Review)

The original save simulator. Seriously, you’ll spend almost as much time saving your game as you will playing it. Deep and hard, how your mother likes it. Dave’s wildcard pick

Again, who would have thought fun over simulation was a good idea? Activision made a decent series at one point. And 3 is the last time before they went full retard with Jackass stuff. The music is ace too. (Full Review)

We love LttP! Though it is lucky that we didn’t use a wildcard on Wind Waker. No, Ocarina of Time isn’t even the 2nd best Zelda. (Full Review)

This would probably be higher in the list if Jamie could figure out where the last Exit he’s missing is! Forever stuck on 95! Jamie’s Wildcard pick

Insanely hard run and gun action and was almost as perfect as a Sega Genesis game could be. Craig’s Wildcard pick

Dave actually 100%ed this, and for that reason alone it is this high in the list. Well, that and the fact is was awesome. (Full Review)

Basically Theme Park but you’re the baddy. It is such a shame that Bullfrog Productions were murdered by EA. Cunts. (Full Review)

Slippy might be the worst, but Lylat Wars was immense. By far the best Star Wars game ever made. (Or is it…) (Full Review)

Mostly here to troll the fans that Half Life 3 will never be released. Dave’s Wildcard pick

So many Mega Man games to pick from, but MMX2 just edges it. The right difficulty curve, a totally bitching soundtrack, and not as hard as the original series. (Full Review)

This game is the reason Craig gets out of bed in the morning. Fanboy doesn’t quite cover it. (Full Review)

Tight controls, huge levels that are fun to explore, a multitude of ways to complete missions, and fun weapons like the sticky shocker. Craig’s Wildcard pick

Another victim of the wildcard system, as Silent Hill 2 probably tops it. But Silent Hill was deep, dark, and intense, just like your mum. (Full Review)

This one is our favourite. Better story, better characters, and a villain who actually succeeds. Also, no dopey/whiney/douchebag main protagonist (Full Review)

Choosing the best Resident Evil felt a little bit like Sophie’s Choice, but for us Nemesis just edges 2, and while 4 is pretty awesome, Nemesis takes the Resident Evil Crown. (Full Review)

There isn’t much Jamie and Craig agree on, and here we are in total agreement. Awesome story, awesome characters (HK-47!), and Bioware started something that even Mass Effect hasn’t topped. Everybodies Wildcard pick

No, we are not having a laugh. Yes, the graphics are pretty poop now, but the game still plays like a dream, and is much MUCH better than Mario64 (Full Review)

So there you have it. Our top 50 games, if you want to know the list if you include more than one game per franchise you can view that list here. Feel free to comment on what we did/didn’t get right.