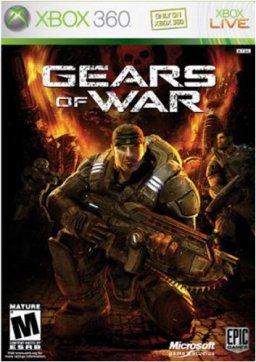 It is hard to remember a time before Triple A games being coverbased shooters, with auto regen-health, but to it’s credit GoW was one of the first out the gate.

Now… Does this mean it was good? Or not…

I actually don’t know what the story is.

You start out in prison, the game starts, 2 seconds later some bloke (Dominic Santiago) comes and gives you armour, and you’re off. Apparently, you’re on a planet called Sera. I don’t remember hearing that in the game, and didn’t notice it in the manual. But you’re not on Earth. So this is basically Avatar. You are the alien invader killing the indigenous population.

And this is one of the bigger issues with the story. You have no reason to care about the characters, or the story. Marcus Fenix is built like a fridge. His biceps are the size of a small car, you’re not on Earth, and the characters are a popped collar away from being full blown frat bros.

There is no reason to care about it. Seriously. 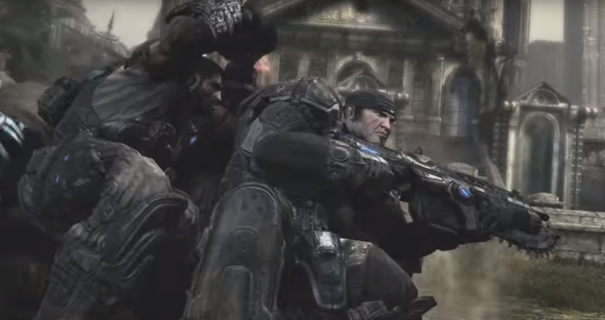 Anyway, you’re on Sera, and the Aliens (Locust) don’t want you to be on Sera.

You start in Prison, rescue Delta Squad, then all of a sudden you’re in a city on some terrible moon buggy/APC vehicle stage, you’re then in a cave, then a ruined house, then on a train.

I actually didn’t notice what peiced this together, just a few guys grunting. then you’re in a new place.

The game ends when you drive a train with a bomb on it, into a crater. By this point I was so fed up I was skipping the cutscenes. But yeah. Story.

Because the game was designed for coveryness, you HAVE to use cover. This makes shootouts boring.

You come to a room, there are random amounts of chest high walls. You know a fight will happen, and one does.

You kill these people, then you get to move ten meters, to the next set of chest high walls.

Repeat this process for 6 or so hours.

And that is the game.

Hide here until the jam is wiped off your face.

A screenshot doesn’t really show it, a screenshot makes GoW look quite good. But at high speed, everything sort of blurs into one. You can’t tell enemies from friend, and just makes the game feel uninspiring.

There are two bosses, I think. Certainly only 2 that I would count as bosses.

The first, is a battle against a MASSIVE Spider. This should have been an epic scramble that is terrifying (think the fast spider monster in Resident Evil 4), but it is sooooo lame.

It curls up in a ball, then slowly telegraphs an attack. You shoot it’s soft belly, then when it roars you shoot it in the face/chin. Do this 3 times and it falls in lava/Imulsion… Unless you are REALLY shit, you won’t even take a hit. For you to die, you’d need to be hit 2-3 times in a row. There is NO danger here. And ruins what should have been an epic boss fight.

The second boss is the final boss. It is against some bloke called RAAM. You see RAAM near the start of the game when he kills one of the random dudes who is in our party, but he isn’t mentioned. You don’t know who he is. I only know his name because the mission objective said “Kill RAAM“.

So yeah, the final boss is hard. That seems fair. But actually it is broken.

You need to do it CO-OP, but since it is 10 years since the release, there are no people playing this any more. Your AI partner will just die, and once they are dead RAAM will endlessly focus on you. Meaning you’re fucked.

RAAM has some massive gun, but he has the sodding death bats of doom (Kryll?), that kill you if you go in the dark (an enemy that appeared for 3 minutes in act 2). This took me close to 20 attempts, and I only finally killed him because the game glitched. RAAM got stuck trying to walk around the box I was cowering behind. I just blind fired over a wall at him for 20 seconds, and he died.

GoW is a poor game, it isn’t bad in a broken way, just in a “it isn’t fun”, and games should be fun.

The game is too linear, the gun fights are boring, the bosses are a let down, and this is only ever broken up with a terrible moon buggy/APC section that is just awful, and, AND, a mine cart section.

Yes it was one of the first big games to use certain features, but Gears of Wars is a generic by the numbers shooter with no real stand out features.

Pros: It is relatively short

Cons: Mine carts, moon buggy, boss(es), graphics, lazy and by the numbers