Goldeneye is without doubt one of the finest FPS/stealth shooter games ever made. This is technically its follow up (ignoring other consoles) for the N64.

Welcome to The World Is Not Enough….

Much like its predecessor, TWINE follows the film and does a decent enough job. There is not a lot more to say about this, so I shan’t.

The gameplay is in a similar style to Goldeneye though not as fluent and at times it feels as though the screen is moving with you rather than your sight moving independently. The levels are fairly linear though a few being more open plan become easy to get lost in. Once you have had a scout round though they are easy enough to navigate. I could have done with a map in one or two of them, namely the final level – but I will cover that later.

The weapons are different but plentiful in variety. I am not sure whether there are more or less in TWINE (than Goldeneye) but I definitely wasn’t bored when going through the levels and shooting people in the face. Just, make sure it aint M 😉

You also now have 4 watch ‘weapons’ – which are actually a bit more like gadgets – that you have access to during every level. These are Watch Laser, Stunner, Grapple and Darts. The laser is as per Goldeneye and as useful as a bullet. The stunner is useful when you need to NOT shoot someone but quietly electrocute them and then punch them to death (why?? Exactly) The Darts are good as they instantly drop anyone…but they will get back up after 30 seconds unless you punch or shoot them to death. The grapple is used to latch onto something above and climb a sort of wire to get to places you otherwise could not reach. It is more of a nuisance and further mentioned in my section about the final level.

The gadgets are basically things like a keycard, safe cracker, ID pass and suchlike.These are level specific and not really worth any more description.

Okay so in a couple of levels you get night vision goggles or infra red. These are useful and kinda cool.

A big BIG flaw in this game is that it introduces a jump feature. Why oh why oh why would you do this? In theory it could add an extra fun element to the game. In practice it doesn’t. There is no way to set up the controller so you can adjust your sight up and down (without using the L/R button) AND use the jump feature without having to switch the way you hold the controller. This makes for a massive ballache as you are then using the control stick with a different hand AND, well, it is just annoying.
The other problem with the jump feature is that you actually have to make the jump after you appear to be off the edge of wherever it is you are jumping from. This takes some getting used to and when you are required to either make the jump or fall to your death – it is EXTREMELY annoying *rage smashy pad time*

The other problem with the controller style is again covered in my paragraph about the final level. Otherwise, the controls are somewhat like Goldeneye: bad for some things but not too bad all in all.

You need one to save progress on this game. “Why??” I hear you cry. I don’t know. It is another feature that just adds annoyance – especially when the only mem card we could get our hands on is faulty and as such the only way I could complete this game was to do it over 3 days whilst leaving the N64 on overnight. Thankfully this console doesn’t have an over-heating issue. 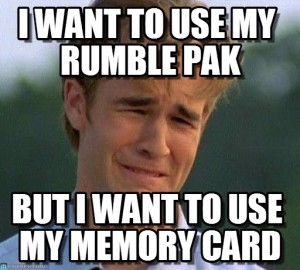 Okay, sorry to keep referring back to Goldeneye but it is a great point of reference. The difficulty used in that game was sort of:
Agent = can walk through basically eating bullets/have 1 or 2 objectives per level.
Secret Agent = might wana dodge some of the bullets/a few more objectives/the enemies may take a bit more to kill. 00 Agent = Dodge everything/multiple objectives/shoot EVERYONE in the face several times.
TWINE doesn’t follow this pattern. Agent seems to have almost as many objectives as 00 Agent. The enemies seem to take various amounts of bullets depending upon the level and the type of weapon you are using.
* Strangely some can take 5 pistol shots and stay standing and others are dead with one tranq. dart and a single punch……..to the buttocks. Odd.

You also have objectives given to you as you complete others during a level. This is a nice interactive feature but can also be annoying at first.

Okay, your final level is (or should be) pretty epic and sort of interesting and yet tough at the same time. This is just annoying.
You begin inside the submarine where you ended the previous level. The submarine is now mostly full of water AND slowly becoming more radioactive. Your objective is to ‘swim’ to the reactor room, wherein you press a button which basically kills Renard (the main boss) and then you have some more grappling to do to get out. That is it.

The main annoyance of the first part of this is that when attempting to swim through the submarine, you have to use the R/L button and controller stick to adjust your aim and, well, it just doesn’t work. Pair this with the fact you only have a certain amount of oxygen before you need to get air – which is available at the top of certain rooms around the level – and you will be almost dead/increasingly volatile in no time.
Plus, it is SO easy to get lost in this part of the level and that + the above is MASSIVELY frustrating *epic rage fit smashy pad time pt2* 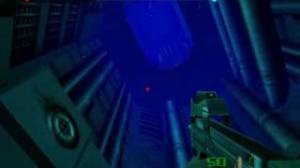 IF you manage to stay with it long enough to find your way to the reactor room, you then have a shitload of grappling to do, shoot a few guys and that’s the level.

Without doubt one of the biggest let downs for a final level I have EVER experienced. The boss is non existent, the controls are absolutely retarded and the sudden requirement of loads of grappling towards the end is just unnecessary.

This is a decent enough FPS and similar enough in style/gameplay to Goldeneye to be worth checking out. The controller style is a pain at times, the jump feature is silly and the final level is ludicrous – if only in its complete *yawn* and utter frustrating trying to navigate through the submarine immersed in water. Even with a map I guarantee you would get lost. But there are no maps…so, you WILL get lost.

Follows the film fairly well, graphics are better than previous, gameplay and shooting is fun along with the few minor nominal extras make it an interesting enough twist on it’s predecessor to give it a try.

The jump feature, the controller style, the difficulty range, the memory card reliance AND……. THE FUCKING FINAL LEVEL. Holy fucktard this basically ruined the game as far as I am concerned and I am baffled to hear that it is one of the selling points in the synopsis on the box! Utter utter nutters.

A decent enough game were it not for these few things that ultimately drop the score and make you wana hurt yourself and or other people.

I come from a future World where due to the polar ice caps melting, there is only woodland. The World is ruled by a giant mechanical badger named Zordosh and as such I was sent back in time by The Resistance to protect the future leader ......a young otter called Bong Johnner. I seem to have gotten caught up as a games reviewer and heavy metal frontman in the meantime.....