Christ, bint isn’t even in this game…

Link’s Awakening is a sort of a sequel to Link to the Past. Link’s Awakening started life as an unsanctioned GameBoy port, which eventually, led to a game in it’s own right.

The game was developed to see IF the GameBoy could support the Zelda series, and as a result of this unofficial testing, Mario characters infiltrate the game. So strictly speaking, this game isn’t canon, and at the time, was considered a spin off. Though, since the Zelda developers make it up as they go along, this is in fact the 4th SEQUEL to LttP. The other 3 will not be released for years (Oracle of Ages [2001], Oracle of Time [2001] and Link Between Worlds [2013]).

So, Link has saved Hyrule for the 3rd time, and decides to go have an adventure. He gets in his boat, and after “Months of difficult travel”, he gets caught in a storm, and ends up getting shipwrecked on Koholint Island. Marin drags you back to her house to recover, and when you *cough* Awaken *cough* Tarin, and his daughter Marin talk bollocks about a Wind Fish.

The cutscenes are actually very impressive and beat many cutscenes on later consoles (PS1/N64). I really enjoyed the heartfelt scene with Marin and Link on the beach, where she says I wish I was a seagull so I could fly away from here”.

Marin has a weird seagull fetish

Link’s Awakening is Legend of Zelda levels of difficult, the majority of the time, I had NO IDEA where the hell I was going. You’d occasionally be told by the Owl (Yup, the Owl’s first appearance) you need to head West, or through the mountains.

You also get telephone points on the Overworld where you’d get some hints as where to go next. But on the whole, they aren’t that much use.

Figuring out that you need to swim under a bridge for the Mermaid Scale on the trade quest is horrible. And while the whole trade quest is presented as optional, it is actually 100% required. You get the Magnifying Lens, from it, and you need that to read the directions for the final cave! Also, you get the Boomerang. The Boomerang is awesome! It 1 shots the final final boss Dethl. It also kills most enemies in 1.

Dungeons start off easy, but very quickly start to become too fiddly, relying on secret passages to progress. It wasn’t long into the game when I started having to rely on guides. The compass does make life easier for you, as it will make a noise when you enter a room with a chest in, so you’ll know you need to do something in that room for a chest, but they don’t inform you of secret passages.

This all leads to some moments of severe frustration. While graphical clues are given for some bombable walls, not all of these are shown. Even when they are, they are sometimes very difficult to spot on a small monochrome GameBoy screen.

The WORST thing for obtuseness, is that there is a book in the library, which gives you the directions you need to go in the final dungeon. The map is unique to your save file, and you’d never know to go and read that specific book unless you cheated. It is 8 directions long, so can be memorised, but I’d suggest you write it down, or take a really crappy grainy picture of your Gameboy screen. 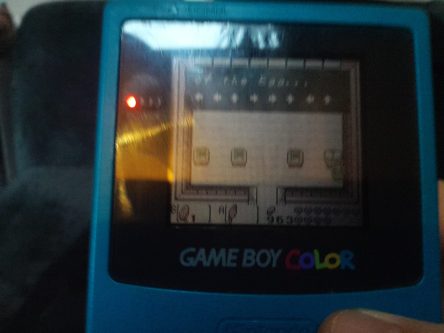 The reasons I do not count Link’s Awakening as canon, is that the game is a spinoff, and brings stuff that doesn’t belong in the Zelda Universe.

There are small Easter Eggs, like Wort (From Super Mario Bros. 2), or the collectible Yoshi Doll on the Trade Quest, OR  Goombas, and Twomps appearing as enemies. Hell,there is even a lady is pretending to be Princess Peach (called Christine in the game). They are canon breakers.

Plus, more crucially, Nintendo admit it was created a unofficial spin off.

All of this adds up to not actually part of the series, and therefore not fitting into the timeline.

The first boss is a Moldorm (from LttP), smack it in the tail.

The Genie is next, and he is fairly hard as second bosses go. Avoid his projectiles, pick up bottle and throw against a wall. After you have done this 3 times, the bottle breaks, and you can proceed to smack the Genie in the face with your sword.

Slime Eyes takes some figuring out. You smack him in the face and it starts to divide in half. It is at this point you need to quickly charge at him with Pegasus boots. Once you do that, smack the two eyes with your sword.

Angler Fish. Is too easy. It is side scrolling 2d view, and you just smack him with your sword. I’d be surprised if it even got a hit on you.

Slime Eel is tedious… . Eel will appear out of 4 holes in the corners of the room, and you have to pixel perfect shoot him in the middle of the mouth to pull him out with the hookshot, you then smack him with your sword. My advise is pick a corner, and stand there. That way the tail is easy to avoid.

Facade is easy and almost impossible to die on, just remember to stock up on bombs before entering the fight. Basically, you can stand on his face and he can’t damage you. Drop a bomb when he is there, and move away. Rinse and repeat. His only attack is to open small holes in the floor which damage you 1/2 a heart. First attempt, I ran out of bombs, and spent 5 minutes trying to kill myself, before turning GB off and on again…

Evil Eagle is horrible. And goes on too long, but stand in the middle of platform (2d view) hit him with sword when he gets near (or bow/hookshot), use shield, and run against the wind to avoid being knocked off tower. Thankfully, you don’t have to start again when you get blown off, it just means this fight takes too long.

Hot Head, errrm, you shoot him with the Magic Rod (of fire). Doesn’t make sense, but fire kills this fire dude. Easy fight.

Dethl was NEVER this far away from me!

Wind Fish, isn’t neither a fish, nor windy. But as giant Multicoloured whale.

It is a god damn dream. Urrrrghghghghgh. It pulled a Lost on us way before Lost (Or Final Fantasy X) was good (and subsequently shit).

Well, technically it wasn’t a dream, it happened, but it happened in a Link’s/Wind Fish’s imagination. After you have beaten the final Nightmare, Link wakes up on a bit of wood drifting in the sea. He then looks up and sees the monstrous Wind Fish in the sky.

There are clues throughout the game alluding to this, the bosses being reffered to as Nightmares, the Nightmare keys, and around Dungeon 6, you are warned about the world ceasing to be if the Wind Fish is *cough* Awoken *cough*. And the twist of it actually happening, is nice, but it is still a dream.

Finally, if you were some sort of god, and beat the game without losing a life, you’ll get to see Marin flying off. In the Colour Version (Link’s Awakening DX) Marin turns into a Seagull.

You are left floating in the sea on a small piece of wood. Basically, you’re gonna drown…

Link’s Awakening is a good game, and a fantastic Gameboy game. Timeline and canon issues aside, it is a fun game. My only gripes are with the obtuse puzzling.

If you can get a copy of the Colour version you should. It is slightly better.

The HELL IS THIS!