Zelda 2 divides opinion. It even divides my opinion. I am still struggling to decide if I like it or not. However, one thing is for certain. Zelda 2 is probably the most underrated Zelda game.

Zelda 2 is a direct sequel to the Legend of Zelda. Set a few years later, a 16 year old Link notices the Triforce markings on his hand glowing, a different Princess Zelda is asleep, and something about her brother being evil…

You need to read the manual for the full story. As very little is explained.

There is no Ganon in the game, but you are fighting his followers, and if/when you get gameover Ganon is resurrected using Link’s blood. Again, this is all in the manual, and not remotely explained in the game.

You’ll see this a lot!

A game of three halves

I could have said thirds, but three halves has a ring to it…

The first third of the game is hair rippingly frustrating. Figuring out where to go and what to do is atrocious. The people in the villages are NOT helpful, and you really need a guide to know where you’re going. There are many examples of this, but things like “finding the hidden house in the swamp to get a letter to be allowed to cross a bridge” ranks highly on the bullshit scale.

Second on the Bullshit scale (in Zelda 2) is that when you get gameover, you have to start at the very beginning, not in a sense of restarting the game, but in a you physically start at the start of the game. This is infuriating when you die on a boss, and then have a 30 minute schlep to get back to the boss fight.

Entering Death Mountain is the worst. It is a maze, which is filled with hard monsters (for your level), and will lead to many MANY deaths. Again, this requires a guide, and even then, you’re screwed unless you level up. 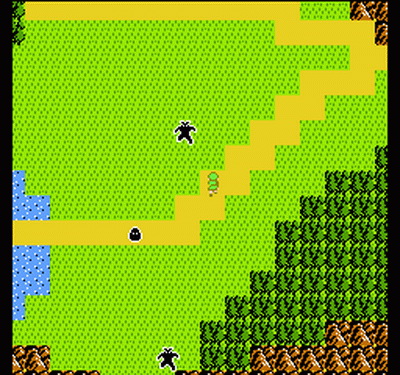 Avoid these to prevent “random encounters”

After Dungeon 3, the game gets a bit easier and better. This could be because I spend 3 hours grinding skull heads getting 3 exp per kill, but once I hit Dungeon 4-6 it was all a relative cake walk. I 2 shotted boss 4, dungeons become more intuitive, and overall, I just started to have a lot of fun playing Zelda 2.

Then… Then you hit the Valley of Death and the Great Palace. This section is horrible. The journey there is onerous, littered with pitfalls and instadeath.

On Zelda 2, you have knockback. FUCK FUCKITY FUCKING FUCK! I hate knockback! This is probably the only way you’ll die from dungeon 4-7. When yiu’re hit, you’ll get knocked back 3 spaces, which, on dungeon 6 and 7 will inevitably mean falling in lava.

Very early on I realised I’d need to grind, and boy is is a chore. When you get gameover, you lose all your current EXP. This puts you in a quandry… Do you

A) Grind Lesser Pigs of the Wild for 3EXP
Or
B) Risk fighting things that give you 20 EXP per kill, but you’ll inevitably die (Ghosts in graveyard)

I tried both, and settled on A. I found it quicker killing the skull things on the Bridge near Bagu’s house, but it did mean I ended up spending 3 hours to level up 6 levels.

I chose to grind here.

There isn’t much variety in how to kill the bosses (hit them in the face), but there are some intersting mechanics, which are actually fairly impressive for a NES game.

The bosses don’t really require items to beat them (except Thunderbird) so it is nice to not HAVE to use a bow/bomb/thing in an overly signposted way. Smack the bastard in the face with a sword is a good rule for killing things. But, at the same time, there is depth to it.

Zelda 2 is very much a classic JRPG, obtuse puzzles, insane difficult spikes, and it makes me rage quit. A lot. The overworld map takes place in a top down view similar to the first Zelda game, the only difference, is that now battles take place in a semi “random encounter” style of battle. Unlike Final Fantasy games, you can see the enemies, and if you’re lucky, you can avoid the fights.

Once you enter a battle/town/dungeon, the view switches to side scrolling platforming view, it makes battles more fun, and interacting with the townsfolk is “interesting”. However, it seriously detracts from the dungeons. Everything just seems smaller, and less epic when your options are go left or right, with the occasional elevator.

Exploration is actually more fun in Zelda 2, there is less of this “burn a random bush” type exploration, and more “walk around and you’ll find something“; apart from the leap of faith/secret walls in Dungeon 5 , 6 and 7 (they suck).

There are many reasons why Zelda 2 is a better game that Zelda 1, the issue is how much the negatives counter this.

Puzzles are less obnoxious than “Grumble, Grumble“, but there are some head scratching moments, especially around gaining spells or attacks in the towns, as these usually require a poorly signposted side quest, like “Find the sodding baby in the maze“.

Zelda 2 is longer, harder, more difficult in places. It can be less intuitive, and Death Mountain is the WORST.

Overall, the changes in pace, the flow of the game makes it a more rounded experience, and for me, that makes it a better game. If the first third of the game wasn’t as awful as it is, I’d be giving this around 90.

Pros: Genuine sense of satisfaction at beating it, bosses are surprisingly varied and fun