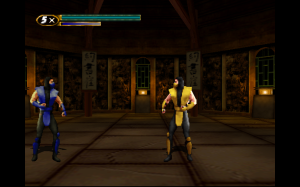 “YOU WILL FAIL” cries Scorpion before quite literally scampering away. He is telling the truth.

MKM is a side scrolling beat em up with the intent of filling out a back story for Sub Zero. Imagine if Streets Of Rage was made by somebody who has seen the first Mortal Kombat movie, but has never in their life played a video game before. In order to understand my frustration, allow me to show you the control scheme for this broccoli fart of a game…

So, we’ve had the punches and kicks moved to the C buttons on the n64 pad…OK..we can work with this. It’s a bit awkward, sure, but it’s not insurmountable. The run button comes in SUPER handy later..Oh! That’s the one! You see that? THERE’S A TURN BUTTON. THERE IS LITERALLY A BUTTON TO CHANGE THE DIRECTION YOU’RE FACING. I cannot fathom, from any perspective, why this could possibly be necessary! It’s not optional, either. You HAVE to press it to face the other direction. Considering all the leaping over you that the enemies do, this proves cumbersome. So, you may consider yourself hampered from the word go. You find the run button, and you think ‘that’s actually quite nippy, I’ll keep going and I’ve died’. The “traps” in MKM amount to little more than giant bloody pillars that hammer down from the ceiling. You’d think you could spot and avoid these easily enough, but they don’t activate until your fucking eyelashes are touching them. Hence – the run button becomes useless. Such is the frequency of these “traps”, and such is the need to edge ever-so-slowly towards them, that you simply cannot run. You’ll die. End of.

This is the start of level two. You can walk left and die. WHY?! WHAT IS THE POINT?!

Combat is shit. No colloquialisms. No fancy comparisons. Utter, utter shit. The C button thing just isn’t good. It makes all of your moves clunky and laboured, which doesn’t help when there’s enemies leaping all over the sodding place. Here’s the thing – the Mortal Kombat engine already existed here! This game came out after the first three! SO WHY CHANGE IT?! He still waddles around like he’s carrying a steamy pantload, just like they do in the original beat-em-ups, so why change the combat but not the movement?! It’s at this point that I started drinking at two in the afternoon. The enemies come in two flavours – Paul Blart or Bruce Lee. Meaning you can either stand there whilst they unleash the fucking merciless dragon on you or, they stand perfectly still, do literally nothing, and accidentally get smushed by a pillar because their relentless blocking forced them backwards. Mortal Kombat durp-de-durp! Durp-de-durpedee-durpee-durp! 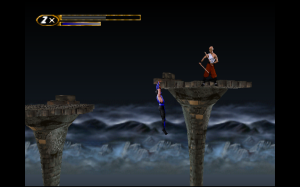 Ah. Pixel perfect jumping. Just what I was hoping they’d throw into the mix.

But! The fun doesn’t stop there! Just like with no smoke without fire, there’s no shitty game with pixel perfect platforming! MKM is chock full of jumps that require the precision of a military sniper, usually with a Bruce Blart Mall Ninja on the other side. Every. Single. One. Of these jumps is instant death. No falling to a lower platform – which would kill you anyway – just a healthy plummet down to hell, where the creators of this game have a special circle waiting for them. Just as a final example of how utterly woeful MKM is – I tried a cheat out in a vain attempt to make my suffering pass more quickly. I found a password for an invincibility cheat online. I fell from a notable height, and guess what? I DIED. I HAD INVINCIBILITY ON AND I DIED. EVEN THE CHEATS ARE BROKEN! I don’t know about any of you – but that’s a first for me!

Why leave speech in? Scorpion had an adorable little chat with me a couple of times in the first level, and it sounded like he was eating socks whilst throwing up socks at the same time. *mufflemufflemuffle* he said. I can only assume he was begging me to end his pain. The graphics are fairly hideous. The cutscenes on the N64 version have been limited to still shots with subtitles. I’m taking to YouTube after this, because I bet those cutscenes are glorious. In-game, you can expect the same blurry-ass sprites used in the original MK, with possibly LESS animations than used in those games. There are moments of quasi-3D with the environment, which look nothing short of ridiculous and absolutely smack of ‘we did this because we can’.

MKM features a highly intricate plot about amulets and sorcerers and..Sub Zero…and…who cares? Honestly, it would surprise me if the people who wrote the damn thing could remember it.

Jesus. I have played some rotters in my day, but I never thought the shade thrown at this game back in 1997 would be quite so legitimate. An ugly, unplayable, accidentally hilarious mess that should only be used for forcing squatters out of abandoned properties, enlisting people for the KKK, and stripping rust off submarines. Don’t just avoid it, kill it with fire. Irredeemable garbage.

Pros : It is, objectively, a video game.

Scores are for games. No score for you.

MKM was forged in the fires of Mount Doom by your ex, using the souls of 1000 dead babies and your favourite pair of trainers. The really comfy ones.

In reality, it was universally panned, sold like pre used needles, and upset literally everyone ever. Except for one guy from Gamespot who said it was great, and is history’s greatest monster.