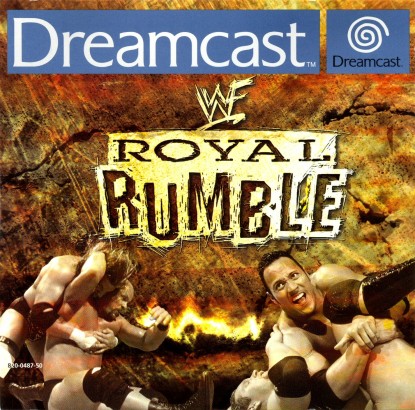 Despite Craig’s protestations, the Attitude Era of Wrestling was THE BEST. Yeah, we know that for every awesome TLC there was a turgid Bob Holly match, but there was 10 people pushing for the Championship belt, though only Triple H and the Rock ever had it. 80’s wrestling, was crap. Everything after Attitude has been pretty crap.

Attitude all the way.

When I heard about this game I almost spooged, 4 player, up to 9 wrestlers in the ring! That sounded amazing, and is still technically impressive. I may be wrong, but nobody has attempted more than 4 in a ring since. 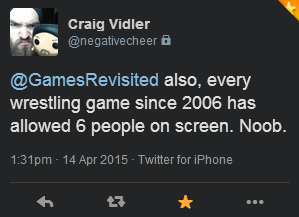 Turns out I am wrong…

There was a reason for this… It is shit.

Sadly, once you get over the fact there are 9 wrestlers in the ring, this game is poor. 19 wrestlers, some of which were just bizarre in selection (D-LO as a headlining superstar… in 2000?) with the mighty Vince and Shane McMahon as 2 secret unlockables…

“Gee, I can’t wait to unlock Vince” said no one ever.” 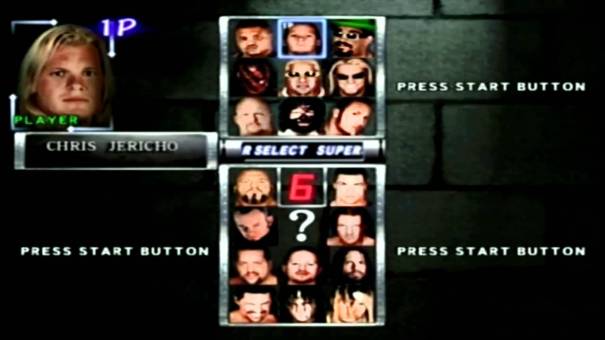 The actual screen is almost as blurry as this screengrab

In Royal Rumble, you get two game modes. I won’t add to the word count by saying one of them… If you don’t know, you shouldn’t be here.

The other mode is Exhibition mode (one-on-one). This is a terrible arcade “career”, similar to what we got in WWF: WrestleMania Challenge, except a game 10 years older did it better. It is shit.

You fight 10 of the “Superstars” in a random order, and they are as hard as the level you fight them on. So D-Lo can be the level one whipping boy he was born to play, or he can be the level 10 hard as nails guy…

It made no sense. It was shit, you unlocked Shane McMahon for doing it. That folks, is your motivation. It is shit.

You also choose a partner. They stand at the side of the ring, and interfere when you tell them too. This frankly, ruins the game. I chose, by mistake to be the Big Show and I chose Triple H as my partner.

You then get to choose a move set for your “helper”. You can choose double team type moves, or a selection of their ordinary moves.

Except… The ordinary moves contain signature moves. So, every 20 seconds, I could say, “Hey Triple H, come and Pedigree this dude”, and like the good little boy Triple H was, he would dutifully run in, pedigree them, and I would win. It is shit.

Royal Rumble looks good, even by more modern standards, however, the game just plays like shit…

Typically in a wrestling game you get a target swapping button, allowing you to easily change who you want to whomp. In Royal Rumble you just press the direction you want to attack. It sounds simple enough, but since moves are assigned to a direction and a button, it usually means up gets a headbutt, right gets a suplex, down gets a DDT, and left fails to connect miserably.

Which leads to a major issue, the collision detection isn’t spot on, so you’ll flail madly as you try and grab a wrestler, only for your grapple/punch to go through them, because the game thinks you’re targeting a different wrestler. It is shit.

Each match has a 3 minute limit, meaning Yuke’s looked at the arcadeyness of Smackdown and thought, “we need more arcadeyness.”

The match EVERYBODY wanted to see.

Fine, I’ll talk about the other feature.

You guessed it, a Royal Rumble…

Except it isn’t. The closest thing I can describe the Royal Rumble being is, ‘like a soulless version of No Mercy’s “Survivor Mode”.’

You have a 3 minute time limit, which increases every time you eliminate an opponent, and YOU have to eliminate everyone. If the AI eliminates somebody, they leave the ring, but nothing happens… You start with your target (30 by default), and you have to eliminate 30, not survive, an enemy eliminating enemy doesn’t count. As there are only 19 wrestlers (+2 unlockables) enemies will repeat. On my playthrough, I had Mankind come out 15 times. Certain wrestlers (Triple H and The Rock) only come out in the last 5 or so, so you get the same 10-13 wrestlers constantly reentering. It is shit.

In all honesty, I don’t think any of the development team in Juke’s had ever played a wrestling game, or seen a Royal Rumble, as they get all the fundamentals of the event wrong.

And after this awful “Royal Rumble”, you unlock Vince McMahon. It is shit.

Oh, and you can all choose the same wrestler…

Matches typically last 60 seconds, and if you go longer than that, 2-3 wrestlers will interfere, removing any skill, since D-Lo, Jericho, and Kurt Angle all run in and use a special on you or your opponent. So there is no skill or tactic involved, just a load of sweaty c-list wrestlers doing very little, and then the match ending.

Hey, I guess they did capture the attitude era after all.

Cons: It is pretty fucking terrible