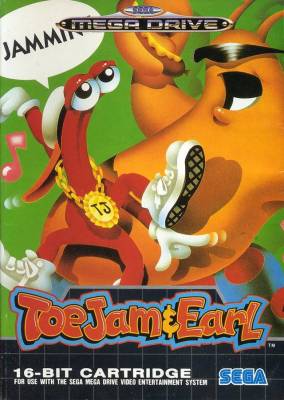 I am not sure how to start this… Except, Toejam and Earl is random, wacky, and a little surreal. Typically, when somebody decribes ANYTHING like that, I automatically hate it, not Toejam and Earl though.

I guess Roguealike is the best description for TJ&E, as the map, the items, the enemies are randomised. There is a “set world”, but most people will play the Random World option. 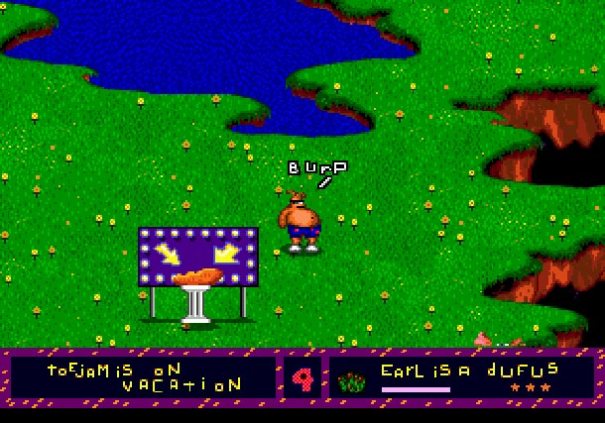 There are 26 levels (0 is a “secret”), each randomly generated, and each with a differing set of enemies. The purpose of the game is to find the 10 parts to your spaceship, and then find the elevator to the next level. Once you find all 10 pieces, you have won.

You level up as you progress through the game, each level brings you more health, lives, and (I think) speed, so TJ&E operates as a RPG. The issue here is, it isn’t immediately clear what is giving you the points to level up. From what I can tell, you get 1 point for every block you uncover on the world map, and opening presents. I am not sure if you get any points for killing enemies.

The chief way to complete the game is to find presents, and use them to your advantage. Problem is, you don’t know what is in the present. Each game randomises what is in each of the wrapped gifts, some are good (extra life, level up) some are mediocre (rose bush, slingshot), some are bad (Total Bummer), the rest are travel items, which, you will stockpile for a mad dash at the end.

As you don’t know what is in the present, you are gambling with your life when you open an unidentified present. Due to bad luck I died on one level inside 20 seconds. Firstly, I got an electric shock, which in my low health killed me. Second, I got a Randomiser. Third I got a Total Bummer, and died. Fourth was a Randomiser (again)…

This is the thing with TJ&J, luck is the prevailing factor. Enemy AI is purposefully erratic, so near misses are usually down to luck rather than your skill.

As you progress through the game, you’ll come across creatures trying to kill you, and until you know the game, you don’t know friend from foe.

The general rule is, if it moves it wants to hurt you. So you become accustomed to avoiding everyone and everything. The problem is, you really need to speak to some of them, and specifically, you need to find and engage the Carrot Man.

The Carrot Man is the key to completing the game. Save your money, save your presents, and hope you’re lucky. It took me about 8 playthroughs before I finally completed TJ&E, and the time I did, was PURE LUCK. I found the Carrot Man on level 3 or 4, and I had about 8 bucks on me. This bought 4 identifies. With those 4, I found the Randomiser, and Total Bummer.

I was basically home free assuming I could avoid the Boogeymen, and the sodding Ice Cream Truck of Death!

The enemies are on the whole, easy to avoid. You very rarely kill them, as this requires the slingshot, so the rest of the time is avoidance, and in a scrape, using a escape tool such as the Hi-tops, Icarus Wings, or a Magic Door. You just have to be careful of the two I mentioned early. The Boogeyman is invisible, and does significant damage if you don’t spot his shadows when he’s near. The Ice cream truck is fast, and relentless, luckily, he is rare, and saved for later levels. Once he appears, I use all my Icarus Wings, and just fly away.

Other notable enemies, while useless, are extremely funny, and well animated, the Nazi Chickens, The Nerds, the Mum and Pram, the Cherubs, the Devils, and Dad with lawnmower… they are all easy to avoid, but they do create moments of tension as you make a break for a ship piece. Some combinations of enemies are punishingly difficult, the Hula Girls, while useless on their own, when with another enemy they can be extremely potent.

Is awesome. The smooth jazzy tunes in TJ&E are an experience, they got the most out of the Megadrive/Genesis, and require a listen.

The randomness can get to you, and is a little annoying at times, on the playthrough I completed, I found 5 ship parts on first 7 levels. the other 5 were spread out, with 2 in the last 2 levels, it means that sections can drag, as you can often go 7-10 levels with out a ship piece.

The game still looks beautiful, the soundtrack is immense, the only things that stops this scoring in the 90’s is that it is a little slow, the RNGesus nature of the game, and it can get really boring at times.

It is probably one of my favourite Genesis games, and to be honest, is truly unique.

Cons:  A little slow, the randomness can be an issue 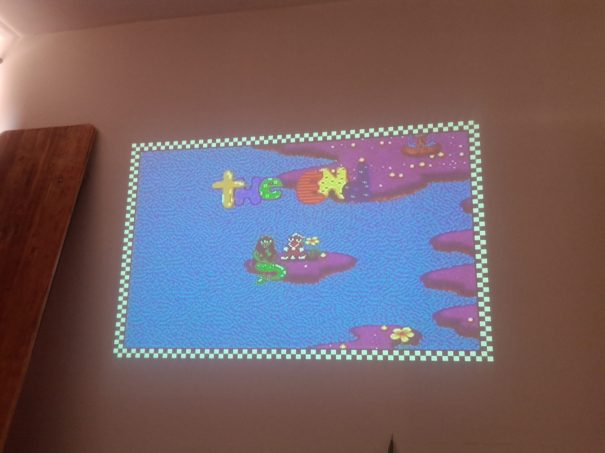 I found the Mermaid…