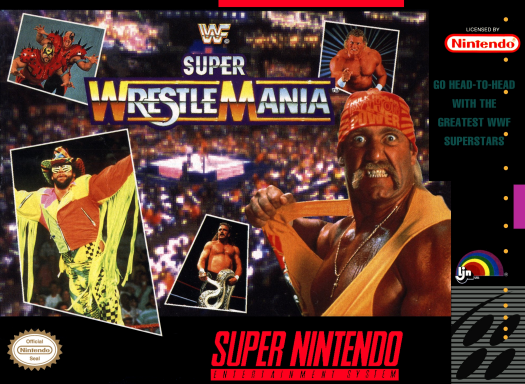 My mate had this game, I remember Christmas ’92 when he got it, I basically moved into his house for a few weeks and played it endlessly. In 1992 this was THE closest thing we could get to wrestling. Satellite TV was way out of most peoples price range, the Internet was still just a few excel documents, and a shitty VHS tape of some of Wrestlemania matches would cost about £30.

Needless to say, I didn’t really know anything about Wrestling, just that Hulk Hogan sounded cool, there was a Macho Man, a bloke with a snake, two fat dudes, the bloke that did that move that kept crippling school kids (The Undertaker), and the one wrestler we knew/liked (Ultimate Warrior) wasn’t in the game.

The game is… Crap, it really is. I can’t sugarcoat this one. It is slow, jerky, and extremely unresponsive.

In WrestleMania you get:

The survivor series allows you to have 4 v 4, but only two at ring side, so you can tag the next person in. Basically, it is a longer version of a tag match.

It was cool to have the feature in ’92, but at time of writing, it is urrrgh.

Unlike WWF: Wrestlemania Challenge, you don’t get a “career”, you just have a series of single fights. So once you beat Hulk Hogan (on your first attempt) there is no reason to play the game in single player anymore.

The Genesis version is much better. You get less wrestlers, different wrestlers (Ultimate Warrior, Papa Shango, Irwin Schyster, British Bulldog, and Shawn Michaels, as well as Hulk, Randy Savage, and Ted DiBiase), you also get a career mode, and… AND signature moves! 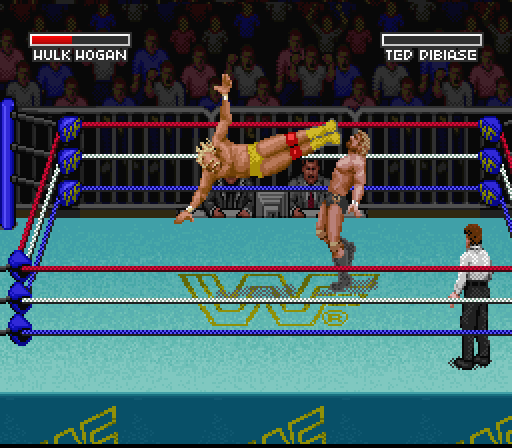 The graphics are good, that is all.

The gameplay is actually worse than the NES version (WWF: Wrestlemania Challenge), you get the same VERY limited moveset, with 3 grapples, a punch, Irish Whip, and a leg drop. The grapple system appears to be button mash based, I couldn’t really tell, but when you grapple, and mash the pad, one of you will do a move. I’ll be honest, I played myself, and mashed on pad, and just randomly pressed the other, and it was still 50/50 who did a move.

You both get health bars that deplete after a move is done to you, a punch will do next to nothing, a grapple will do 10-15% damage. So games will typically last around 60-90 seconds in a one-on-one environment.

I don’t remember Hawk looking like he should be in the Tory Party.

This is where the developers spent all the time. You get 10 Superstars, all in wonderful 16bit glory. The wrestlers look like they should, (as much as graphical power allows).

You actually get decent 16bit versions of the wrestlers music, the best, is Hulk Hogan, as you get almost the full song. Others, like the Natural Disasters you get a 5 second loop of inaudible bass.

Anyway, the game is pretty unplayable now, so don’t bother playing it. I gave the NES version 48%and that was overly generous. So while WrestleMania looks better, it plays worse, and has less content than a game a generation older.

Cons: The game is not Super. Everything else