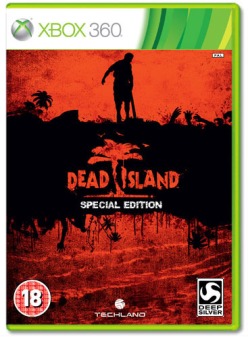 Want me to qualify that statement?

It is fucking terrible, it is broken, boring, and not in the least bit fun.

One common observation is that Dead Island had a solid foundation, but lacked polish. I think this is the wrong way round, I think the game had plenty of polish, it was just built on a foundation of shite.

Open World Left 4 Dead with a hint Fallout thrown in

That is pretty much how it was sold. Instead what we got was a broken just broken.

You level up through questing and killing, you find loot and make your own weapons.

Doesn’t sound hard, it has been done a number of times. But Dead Island gets almost everything wrong.

The upgrade paths are pretty much useless, you get 3 trees to follow and you need to follow one tree to get the best skill (of that tree). But the trees are imbalanced. All MMOs have a top spec build, but RPGs should be a little bit more flexible. Dead Island isn’t.

To sum this up, the customisation is almost none existent.

The custom weapons are STUPIDLY expensive. In Dead Rising 2 combining Nails and a baseball bat made a naily bat.

You have to pay a maintenance bench £1000 for you to hammer a nail into a baseball bat? And from there it scales outrageously upwards. The upgrade system is so broken it is unpleasant, and frankly, it is a waste of time. Items are shit, break, cost loads to make, and repair… Just find a canoe paddle and go crazy…

I am not sure if it is a joke about RPG weapon names, or they went to town on terrible RPG weapon names, but you do find items like “The Spiteful Baseball Bat of Death” with is basically a Baseball bat with a plus +1 damage modifier. So no imagination, or cutting satire. You decide.

Being an RPG you can damage zombies in different ways, smash them in the arm? and the arm will lifelessly slump around.

Hit the leg? Well, supposedly you break the leg and they can’t walk, but it doesn’t really work. You can basically cripple heads and arms. So it is Fallout, but done badly.

The combat system does deserve some praise, and is the only beacon of light in this turgid crap pile. Holding the fight button, you can swing your weapon using the analogue stick. This after some getting used to (and it requires a lot of getting used to) is a really fun way of taunting enemies, breaking the limbs and reducing that MASSIVE hulking boss zombie into an armsless mouthless pansy. 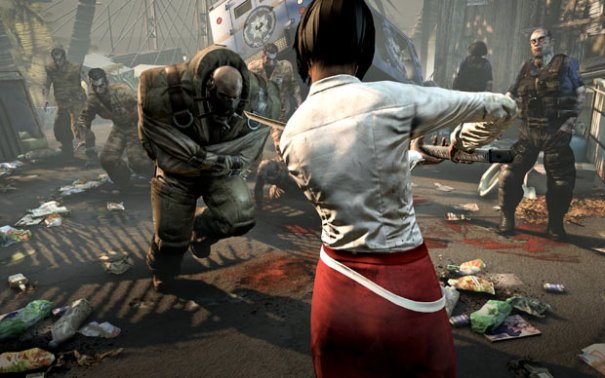 This looks like it’d be fun. It just isn’t…

The missions are pretty much all go A to B fetch quests, they offer ZERO variety (EXCEPT ESCORTS!), and after the first 5 or 6  you are bored. What is worse, they are impossible to fail.

The escort quests are worse than Dead Rising’s ones, and that’s all I’ll say on the matter.

While I didn’t revisit this, we tried it when it came out. It was shit.

How can you make a game with 3 mates killing zombies in an open world boring? All you needed was to have Left 4 Dead + open world.

Seriously, that game writes itself.

When I first played the game there were bugs galore, quests or quest items would disappear, NPCs phase in and out of existence. Replaying it for a few hours I didn’t notice any.

The story istelf is okay, for the first act.

Once you start going inland – why go inland during a zombie apocalypse!!! You start to visit cookie cutter cities, sewers and hospitals.

As the game runs out of ideas, you come across psychopaths, gemeric conspiracies, escort quests, the Weskeresque character betraying you.

The whole game descends into one big cliche, and just ceases to offer anything. The one thing going for it (the lush environs) are replaced by grey (just grey).

If the story didn’t desend into sub-capcom pap, with monotonous fetch quests this would be a 60-70ish% game, but as it is, it just feels uncompleted, unadventurous, and bland. It offers nothing.

I bought the “special edition” that entitled me to download the DLC for free, well Dead Island was so bad I never bothered.

The one positive of this game is the trailer introduced me to Tobuscus and Zero Punctuation.