Dead Rising 2: Off The Record is an enigma wrapped in a cliche. It is the retelling of a story, and getting itself a little confused along the way and attempting to fill in the blanks (badly).

Does that make it a bad game?

DR2:OTR is a retelling of Dead Rising 2, it takes place in the same place and time as DR2, but the story is retold, with differing branches and events, and you now control video games least likable main character.

You know what? It works! Frank is no longer as annoying.

The story is that a few years after the events in Dead Rising 1, Frank is a burnt up celebrity who is desperate for the limelight. He enters the stupid Terror is Reality tournament to try and get out of his slump.

In the first 30 seconds of the game they gave Frank more depth and personality than they managed with either Barry, and Frank in the first game. DR2OTR +3 points.

The annoyances of Otis were removed in DR2,. OTR manages to go a step further, and almost perfects the system. You have a wireless bluetooth earpiece (twat -2 points) so you can do things AND take a call, but you also get most of your quests via text message. It makes the quest giving more bearable, and much more immersive. You no longer have to scurry back and forth to/from the safe room, you get things on the hoof, and you check the messages when you can/want. OTR +2 points

I wanted to hate this game, I wanted to write a review about how this should have been £5 DLC at most, rather than a full release. But the game does actually build on the previous story, it changes things, adds a few new items, but on the whole, the story is significantly different enough for it to feel like a different game. The twist is still present, but it is a different twist.

You no longer have a shitty daughter to get Zombrex for, instead it is Frank that needs it, since he got infected in DR1 they seem to have actually thought about this element, rather than shoehorn in a storyline.

Rather than you being framed, you witness TK and a mystery man blowing up the zombie pen, and the story revolves around why TK released the zombies, and Frank’s second big break. There is still the added conspiracy on Day 4, and the reasoning is VERY weak, but on the whole, thestory is improved. While this game is not considered canon, I consider it the better written story, and have the least plot holes.

And, oh my god the final boss is cool. One of my gripes with the Dead Rising series is there was no real “bosses” DR1 had the crappy tank, DR2 had nothing. OTR has a gigantic robot! +5 points for gigantic robot boss -2 for terrible plot twist

The Camera is back

In DR 2 I said the removal of the camera system was a positive move, and it also made sense. Barry wasn’t a photographer, so there was no reason for him to take pictures. With the return of Frank, the camera returns, and to be honest, it kinda works. You don’t have to use it, but it a nice easy way of levelling up on those early levels. It is a feature that does add a little to the game, and the improvements over DR1 mean it isn’t too much of a chore. +2 points

The AI still isn’t great, but as in DR2 the survivors are not zombie magnets. You can mostly just run through the zombies, and your survivors will follow sensibly. They will occasionally get grabbed, but it isn’t like DR1 where you need to clear an entire room to stop them dying.

There is now an onscreen display to tell you if the survivor is near the doors too. You no longer have to guess if they are close enough, as you get a “SURVIVOR X IS TOO FAR AWAY” message. It is such a simple thing, but it solves so many issues you have of backtracking when a survivor was 2mm too far from door.

First playthrough I was 4 short of achievement

It wouldn’t be Dead Rising without Psychopaths, so they obviously return here. There are still too many for my liking, but they have all been nerfed. In the DR2 review I mentioned the guy on the motor-cross bike being fucking nails. In OTR it is now Barry, and he is pretty fucking nails, but at least this time he stops, and gives you a chance to get a hit in.

The bobble head guy has a lot less health, so isn’t a 10 minute choreathon.

Snowflake is nails… But I killed the keeper, and left the room and came back, as when you reenter Snowflake automatically joins you.

You know from a mission description it is a psychopath fight, but since the fights are a little more fair, you no longer actively avoid them. +2 POINTS.

I honestly don’t know if it exists, I didn’t even check.

What I did check out was sandbox mode. All I can say is FINALLY.

Dead Rising had been calling for a silly challenge mode with no deadlines. In Sandbox mode you unlock challenges for killing zombies, and you earn Gold/Silver/Bronze medals for them. These missions vary from:

None of these things are particularly innovative, but they are fun. You can save this progress and come back to it, so no more horrible endurance exercises like infinity mode. The Sandbox mode also syncs with your story file. So money made in Sandbox can be used in Story, you also have the same levelling bar. So you can switch modes to level up if you get stuck in a certain area. +5 points 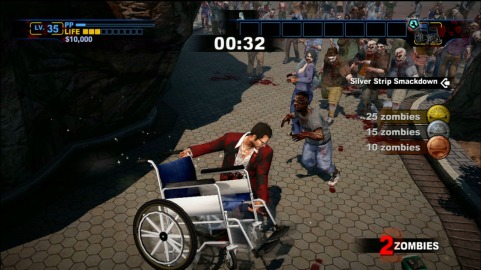 The million dollar quest.  On Day 3 Rebecca is kidnapped and you need to pay a ransom, to go this, you need to grind… You can play the slightly broken (and boring poker game) you can spent 3 hours smashing cash machines, OR, you can play sandbox mode. I hated this quest, it really broke the flow of the game as I had to exclusively play sandbox for a few hours to get the cash.

The poker game can be rigged in your favour by getting the Gambling books, but you can still lose badly due to serious bad luck. A bit like real poker then…

I felt this mission was just padding and didn’t advance the story, and wasted about 16 hours of game time. -5 points.

They fixed them. THANK GOD. +5 points

I really wanted to hate the game, I thought why bring Frank back, he was a tool, this is shit DLC and not worth a full release. I was wrong, it is a really good game. I certainly recommend it above DR2.