I got the Megadrive working over Christmas, and like in 1993 when I unboxed this beaut, I got Mega Games 1. Imagine it… 3 games! SUCH WOW!

Chances are, if you’re over 25 you will have played this game, and it will most likely have been one of your favourite games.  Everyone I know mentions this as the first football game they played, and everyone has fairly fond memories of it.

So, am I going to shit all over your memory? Or is World Cup Italia ’90 the living embodiment of pure football fever, and joy?

For a football game released in 1990, there is a surprising level of strategy/detail…

The first thing you do is choose your match type. Are you doing a single “test match”, or are you doing the World Cup? Simple, effective. No fussing around, no endless menus. 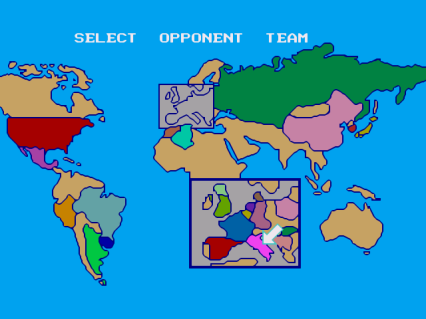 The selection screen was always confusing to me (as a 7 year old), I didn’t know what half of these countries were, hell, a lot of these countries don’t exist anymore, or exist within a couple of years of release (Yugoslavia/USSR). Meaning as a 8/9 year old, I was very confused to find out USSR wasn’t a country!

Anyway, to get back to the point. The selection screen is pretty cool. But does require a geographical knowledge better than an 8 year old.

Once you select Brazil, you then get a team selection screen. You pick your 11 players for the tournament. No substitutes, no tactic changing…

The players you choose do have different stats. For Brazil, every player is 5/5/5/4 stats, England are 4/5/4/3, and other than that, I don’t care. All the countries who took part in the World Cup are featured, but the players are not. There is no Pro Evo daft names like Barry Binikar, or Ball Gazcoin, you get generic roughly English names or vaguely Brazillian sounding names.

The players you choose will make a bit of a difference, you get a Speed Stat, Kicking stat, Tackling stat, and “A” stat which I assume is attacking? But you’re keeper has a “A” stat too…

Anyway, you choose the players with the best tacklers in the middle, the speeding fuckers out wide, etc… Then you play FOOTBAAAAAAAAAALLLLLLLLLL!

There is no referee, so sliding death lunges from behind are the way forward.

You control your keeper… Oh god you control your keeper… You will be controlling your defender, running at an angle to make the interception, then all of a sudden, the control will switch to your keeper, who will proceed to run the opposite direction you need him too, and they’ll score. To counter this, you basically stop doing anything once the opponent reaches your 18 yard line, you then wait for the keeper controls to kick in.

The sound is brutal… Specifically the sound effects, the whistle is terrible, and the “GOAL” is possibly the worst digitised voice I have heard, BY ALL 16bit standards it is pretty poor.

The music however, is actually good. And it better be. As it plays NON-STOP. It is a nice tropical theme, and to be honest is worth listening too. It manages to loop endlessly for the full hour and a half it’ll take to do a full tournament and never grate too much.

Finally, the ball kicking sound is infuriating. Head the ball, hoof the ball, tap the bll, any form of contact with the ball will result in the same plonk noise.

The game is played in a birdseye view, so if you’re expecting realism, you’ll be disappointed. The graphics hold up well, in the sense of they look as blocky as they did then, but it adds a charm to the game that is missing when you have a hyper-real 3D render of Wayne Rooney’s FUGLY ASS FACE.

When you score, you’ll be greated by this static image. I’ll be honest, in 1990 this was cool. In 2015, it is less so. The colour of the guys shirt will change depending on the team, but other than that, you’ll see this a lot. Usually, the other teams, so it does begin to grate.

Other events are marked with graphical changes. Goal Kicks, and penalties both get a seperate screen, which look pretty cool. 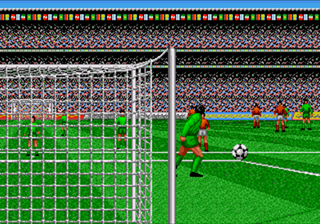 Overall the game is sub-par. The football is hollow, the “depth”in the tactics amount to absolutely nothing, and the kicking noise grates. If you played this as a kid, maybe stick it in for 10 minutes, reminisce. If you have never played it, avoid it. You don’t need to play it, it isn’t terrible, but there is no reason to play this game.

Cons: it kind of is terrible.