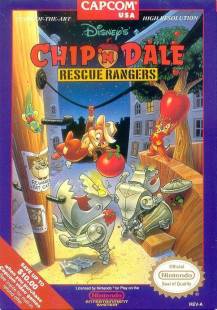 I found a Capcom game I didn’t know existed, and like DuckTails, Chip ‘n Dale it is a Disney/Capcom collaboration.

(Special thanks to flyingomelette as you seem to be the only person who has reviewed this well enough, or provided any background information. Let’s hope you ain’t lying.)

Ch-Ch-CH-Chip, and Dale’s! (Story and background)

Rescue Rangers, CH-CH-CH-CHIP AND DAAAAAAALE’! Ok, I have gotten that out of my system. Now the G,g,g,game…

Phew, right… Stay on track now, and try not to slip between the cracks.

Chip ‘n Dale’s is pretty much what you expect from Capcom. Tight puzzler, where you run right, shoot (throw boxes) and jump over things, before fighting a end of stage boss.

However! Chip ‘n Dale goes off piste a few times. You can run left, on some levels (MADNESS)!  And, some levels don’t have a boss (DOUBLE MADNESS)!! AND, you can skip levels! (TRIPLE MADNESS)

The first level is an intro level, where you’re introduced to the plot, and you go about your Rescue Rangering, and rescue a missing cat. (AWESOME), once you complete this level there is an AMAZING plot twist!

It was all a RUSE! a damn RUSE!… by the dastardly Fat Cat. Fat Cat faked a catnapping to lure Gadget away, so he could imprison her, and force her to make evil robots for him. You then go about your Rescue Rangering in order to save Gadget.

Pick a route, any route. well one route really (H, I, J on another screen)

Where Chip ‘n Dale differs from MegaMan/DuckTails, is that Capcom did away with the hub/mission select screen, and replaced it with a Mario 3 style over-world with differing paths. As a result, you can skip 3 of the levels altogether. The one thing that bugs me here is the levels are A-J, with 0 as the intro level. I don’t understand why you would ever use letters for a level number.

Chip n dale is odd in terms of difficulty. I mentioned flyingomelette earlier, and he gave it a 3/10 for difficulty. I would put it more at 4/5 out of 10. The game is easy, lets be clear. However, there are rage inducing points in the game that take some getting used to.

The Hitbox is slightly off. If you’re within 5 pixels of a hazard, you’ll get hit. It takes some getting used to it, but your brain programs you (through years of conditioning) to know a hit box size. So you’ll take some hits early on.

This area is particularly bad for hitboxes, any closer than this is a hit

There is ZERO recovery time. If you take a hit, you can’t just keep running and skip the hazard. You’ll bounce back, and by the time you’re in control again, you can be hit again.

Knockback, the knockback on Chip N Dale is more pronounced than on any other Capcom game I can think of, this includes the hideous knockback on MegaMan 1! It also has the type of knockback which WILL SEND YOU TO THE CLOSET HOLE!, where… You errrm, slip through the cracks, AND DIE.

Other than those bits, the game is pretty easy. The final boss is especially easy to beat, he (like every other boss) is 5 hits, and dead. But his attack (flicking cigar ash) is slow moving, so while random, is easy as hell to avoid. Just go on the attack, and you’ll beat him without taking a hit.

You get 3 health points per life, 4 lives, and 3 continues. You get lives for, collecting 50 flower icons, or 10 stars, once you hit 50/10 a life star wobbles around the screen. So you can potentially miss it, but on the whole, you’ll find yourself having way more lives than needed to complete the game. There is also a bonus stage at the end of every level, where you have to pick as many boxes as you can in a very short time. It is a nice minigame, however, you’ll very quickly discover it has the same pattern on every level. So building up extra lives is REALLY easy once you figure this out. 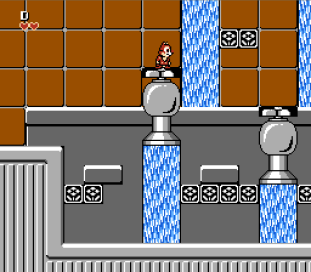 Most of the time your screen is full of flower pick ups. This means LOTS of lives.

You can also replenish your health by picking up an acorn. These are usually hidden under boxes, but you’ll discover these with minimal exploring.

Having said that, there were several points in the game, that on a first playthrough you have no idea how to traverse. On Level F, you have to jump up, and avoid falling down, while platforms move in and out of view. I did this first time, however the second time, the jumps didn’t seem to work. And I lost about 6 lives in here.

On Level J there are fans that blow you backwards, these are simple in themselves, however some of them have birds on them, that a) bob up and down, b) throw boxes back at you. On one particular fan/bird combo, I died like 8 times, because you can’t jump over the bird due to the fan/birdcombo!!! After many trys, I finally (accidentally) threw a box at the birds legs, and it died. Turns out some enemies have weak spots. But there is no reason why you would try it, as no other enemy does. So it felt a little (unfairly) trial and error.

Most enemies are one hit for you to kill them, however some. Weasels/Hawks sometimes take two hits. It seems pretty random, so you will occasionally take a hit when you expect it to die and it doesn’t.

Chip N Dale is a Cpcom/Disney game, so it looks GOOD. You have clear sprites, bright background that fit perfectly with the theme.

Capcom also managed to get a sense of scale into the game, after all you’re a chipmunk, you’re small. It makes sense that everything round you is big. You are navigating table tops, a fan is a major enemy. It is a nice touch, and again is consistent with the cartoon, and theme.

This being a Capcom game the music is pretty awesome. However, it is worth pointing out that Capcom got lazy, and reused some level music multiple times. So while there are 4 really good 8bit songs, there are also 2 that are repeatedly used to a point of utter irritation.

Chip N Dale is fun, it is a relatively short game, that took me 1 hour to complete the first time, however it does offer some replayability, as you can go for the 100% and do all the levels (I skipped 3)., and you can play it with a buddy in the 2 player co-op game. It isn’t the best game in the world, but it’s fun enough to warrant a play if you can get a hold of it.

Cons: Cats are the bad guys, some annoying sections