Posted on October 7, 2014 by Van Rockingham — Leave a comment

A few months back, I read an issue of Retro Gaming (lost it, moved house) and there was a small article on SmackDown! 2 proclaiming it one of the best wrestling games ever made. This infuriated me, and I couldn’t figure out why.

I had the game in 2000, I queued up outside Electronic Boutique to buy it the day it came out, skipping school, and gorging for months on it’s sparkly goodness. I was eventually converted to No Mercy, and through good ol’ father time I began to forget about SmackDown! 2. This is partly because the sequels all sucked (or didn’ live up to SD!2), but mostly it is because No Mercy is one of the best games ever. I am not just talking best wrestling game. I am saying No Mercy is in my top 10 games of all time.

While No Mercy went for slower, more tactical wrestlingwrestling experience, SmackDown! 2 went for full throttle action/arcade style wrestling. It was a departure from what I normally liked, but I loved it. I had played a few utterly terrible wrestling games in the late 90’s/early 2000’s (mostly WcW titles) that a change of pace was needed, and boy did SD!2 do that.

The career in SD!2 is pretty strong, it starts after Wrestlemania, and goes for 5 years. You get 5 events in a month, 2 SmackDown, 2 Raw, and the monthly Pay Per View, so the career is fairly sizable, particularly when compared to SmackDown! 1.

You can play as a real life wrestler, however, what most people will want to do is create their own character, so you can whoop Stone Cold’s ass to WWF Title glory! And with that, I introduce you to Van Rockingham. An almost 100% accurate representation of me.

7ft tall, and tons of fun

The one thing I did edit in advance mode was the personality traits, and frankly, Ex-Nobility is my best one. As you’ll later discover, Triple H is an AssHat. 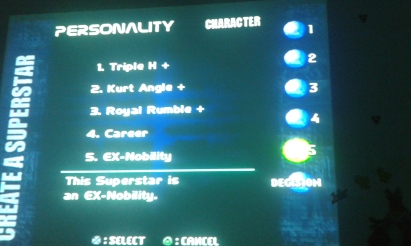 SD!2 looks good in game. The cutscenes are a little shonkey, but for PS1 this was top notch.

SD!2 was the first game (that I can think of) that used actual TitanTrons, and decent quality intro videos/music as it used actual videos, unlike No Mercy, which due to cartridge limitations used an awful stopmotion/freeze frame stills of videos, and slightly tinny music. It also looks good, and compares well to No Mercy.

Basically, if it wasn’t for No Mercy being SOOOOOOOOOOO awesome SD!2 would probably be remembered as one of the greatest wrestling game. Let’s be clear, SD!2 isn’t as good as No Mercy, but FFVIII isn’t as good as FFVII, but they are still fantastic games.

Cons: A little easy, the in game music!

The following is an extract from the diary of a jobbing wrestler making his first tentative steps into WWF.

Week 5: Van RocKING of the RingINGHAM