There is one major problem with going back and revisiting video games from your childhood. Sometimes you come across a gem you missed. Sometimes, something you loved turned into a big turd.

So which is Mortal Kombat 2? is it a gem? A turd covered diamond, or simply, a big steaming mess…

In my review of Mortal Kombat, I had a few issues with the game.  I bemoaned the “press ‘A’ to win mechanic. Well, in MK2 they have resolved this, the fighting is much more balanced, there is a greater moveset, and there are actual characters. But does any of this make it a better game?

Right off the bat, there are 12 characters (plus 2 non-playable, and 3 cheat characters), which is an great improvement over the miserly 7 in MK1. However, MK2 marks the start of some frankly strange roster decisions, that would follow the series. In MK2, Sonya, and Kano are missing

I know this is the second game in the series, but why did Midway decide to drop Sonya and Kano from the roster already?

As I mentioned in the Mortal Kombat review, as a kid I couldn’t do fatalities as I didn’t know the existence of the gore code. The problem in MK2 is… The codes don’t work. I have literally spent 10 hours playing the game, with all the characters (combined, not separately), and I only managed to pull off 1 fatality, and that was with Baracka (urrgh).

From what I can tell, or due to lack of clarity on the internet, different regions had different codes. So for my PAL, SNES version of MK2 the list of codes I have just don’t work. I figured out that some where missing basic information, others were just plain wrong. Examples of incorrect codes are:

Raiden, for example, requires you to hold onto “B” for 10 seconds, then enter a 4-5 button combo (still holding B), so it is actually pretty hard to pull off. It basically means, you spent most of the 2nd round holding a button, meaning you are gonna suck at fighting, and will probably lose as a result.

In MK1 every character got 2 moves, plus a fatality. I complained that all the moves were the same. 1 was a projectile (ice blast/fire bomb), the other was a closer (Scorpion’s chain), in MK2 everyone gets 4 moves plus 4-6 fatalities. So this now adds a much greater variety to the actual game play. The 5 punch combo is now no longer an ultra powerful death move, and you can’t just uppercut your way to the final. Although now, the default way of winning appears to be, jump and kick.

Ok, so in MK2 there is a little more story than MK1.

Shang Tsung begs his master forgiveness, Shao Khan decides the tournament will take place in Outworld, and people have “motivation” to fight in the Tournament. 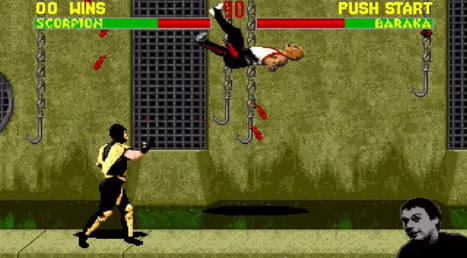 I mentioned the press A to win had been removed, and improved. However, the actual tournament is hard as hell.

I put the game on VERY EASY, and I still can’t complete it. Some fighters in the early rounds are surprisingly difficult, and there is no logic to it. I lost twice to Raiden (as Raiden) by two Flawless Victories, I couldn’t get near him. Then in the 3rd attempt beat him with two flawless victories. It seems that during the initial ladder you are suddenly hit by MASSIVE difficulty spikes.

You then hit the immovable object that is Kintaro. This fight is shit. you’re literally 3 hits from death. EVERYTHING Kintaro does hurts you for 30-40% damage, he teleports (jumps across the screen), he fires a projectile, he grabs and throws you (out the air), if you’re lucky enough to hit him, it takes off little to no damage, so while he can kill you in 3 hits, it takes you something like 30 to kill him.

I seriously can’t beat him, even on the easiest setting he whomps my ass…

So overall, it is a better game, but not by much, The game is still deeply flawed, and still isn’t as good as Street Fighter 2.