Posted on September 18, 2014 by Van Rockingham — Leave a comment 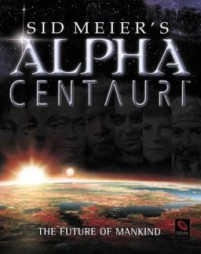 I could write a 10,000 word thesis on this game, but I’ll try to keep it relatively concise as Alpha Centauri is absolutely MASSIVE, and I am terrible at it. I am getting better, but to adequately play games like this, you have to dedicate 20-30 hours playing it to finish one game, and months to master what the hell is going on.

Alpha Centauri was developed by Sid Meier after he left Micropose to form Firaxis, and the game continues from where Civilization 2 left off (if you had a Space Race Victory). The plot was widly applauded at the time, and is compared to the works of Stanley Kubrick. So all in all, it seems to be in good company!

This game is huge, and I can’t adequately describe it. What I will do, is describe the games I played. Badly… and not in much detail…

On one game, I nearly got a Diplomatic win, but I used a Planet Buster (nuke) on the Hive, who were very close to a conquer victory. I was a few votes short of victory, nuked him, and the then had 5 nations declare “Vendetta” on me! (Stupid liberals!). This story would repeat itself in various forms whenever I went for a Diplomatic win. 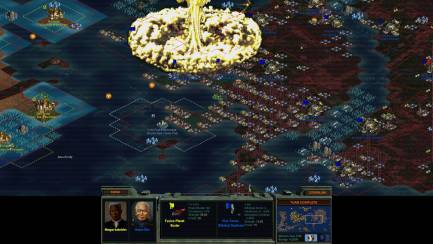 The economic path is annoying as all you’re rivals attack you and demand money. So you’re either wasting money on defense, or paying people off. Though, if you survive the early years, you’ll steamroll later. (I got bored trying to survive early years)

Trascendance is boring, just turtle up and research like a mad man. This plays almost exactly the same as an Economic path, except, you spend your money on completing projects quickly.

If you try to win by methods other than Conquer, you will have the same issue. If you dedicate all your money to research, economy, expansion, then you will be crushed. I get to about 200 years in, and the Hive or Spartans will annihilate me. Unless, you are lucky with the land placements.

In one game, I tried to go for a Transcendence victory. I luckily started on a massive island on my own, built 30 bases in first 50 years. For the first 100 years I met no one and was light years a head in research. Due to this, the enemies start sniffing around and demanding money/research, I would just sell them something that was of no use to me, and use that money to build an army. Then, I start the  “Voice of the Planet”, and get attacked. But you know what? I planned for this shit. I spend 400 years building an airforce, and stationed them in key places.

When the three remaining factions all attacked me, I rolled out my vast VAST V A S T army (100+ latest tech planes). Destroyed the invasion, and… they all surrendered. I won by Conquest (90% win score)! I was SOOOOOOOO ANGRY.

Anyway, I reloaded the game, and basically paid off the final two projects. So they didn’t get a chance to invade. This gave me a win score of 133%

This could be me, but I can’t figure out the tech tree as there doesn’t seem to be a tech tree. At least one I couldn’t discover in the 30 or so hours I sank into it.

On Civilization, you say exactly what you want to research, by clicking on an item in the tech-tree. In Alpha Centari, you select a path, and it logically works through it. This is fine, but I would like some tailoring, particularity when going for specific technology, as I reckon I could choose a quicker research path.

I am a big fan of isometric views in games, it is usually means the game doesn’t date as much. Alpha Centauri, looks good and plays good which is all you want in a game.

Isometric graphics stand the test of time better than the “current” cutting edge graphics do.

That said, there are a limited amount of character sets. In Civ, you could tell the era of your solider, as they would have a musket, a spear, a horse, a tank. In Alpha Centauri, they just get a new name. The Buggy becomes Ultra Super Duper Buggy of Death, but it still looks like the buggy, so you can lose units, during attacks if you’re not paying attention.

Again, I mentioned this, but this game is MASSIVE, and I still have no real idea of what is going on. Despite this, the game does a very good job of hand holding, and you get to choose what support the game gives you. I still get the babying message of “Are you sure you want to abandon your base”, when I move my troops…