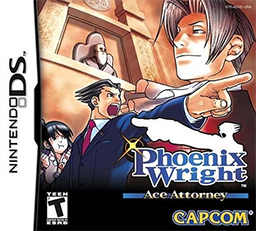 Can we just have a moment? If you’re reading this, I’d like you to stand and applaud with me, applaud the eighth wonder of the world that is Capcom. God bless you, Capcom – all of your games are maddeningly difficult, undeniably obtuse, and in some cases downright alienating. But we still buy them in droves. Why? It’s because Capcoms games are, quite frankly, all brilliant fun and absolutely mental. Even Jamie loves Capcom games (Jamie: I REALLY DO). And so, I present – from the same company that brought you Street Fighter, Resident Evil and Mega Man (ED: and DINO CRISIS!) – Phoenix Wright : Ace Attorney. A lawyer sim. You’re nothing if not diverse, are you Capcom? You minxes. What are you doing later?

Note : Phoenix Wright was originally released in Japan in 2001 for the Game Boy Advance. Therefore – retro! Well, retro enough….Balls to you, Jamie reviewed a game from this damn year!

I can only give you the first bit of the story, because I don’t want to ruin a heavily story based game, and because soon I’m going to make you all play it at gunpoint (*SPOILER* Craig likes this game).

You play as Phoenix Wright, a newly qualified defence attorney working closely with his mentor, Mia Fey. Following the first level, Fey is murdered and her younger sister Maya is framed. And from there the tangled web slowly begins to unweave..

PAY ATTENTION! I’m serious, I can’t stress that enough. AA is not a game to be played with one eye on the TV, or watching those noisy damn kids. Turn the TV off and put the kids in the recycling bins. Upside down. I mean it, no distractions! You see, AA is split into five (Boo! Not enough!) cases, each with two main parts – the investigation and the trial. The investigation is very straightforward, placing you at the various crime scenes from your case. At these scenes you might run into an NPC with some vital information for your case, or there may be nobody there, leaving you free to scour the scene for clues using the DS’s nifty newfangled touch screen. And with this being a Capcom game (swoon), you’re not getting your hand held, you need to find those vital clues yourself! The result? Why, a legitimate feeling of accomplishment as though you’re actually solving a murder case, of course! Seriously, the feeling of satisfaction attained from correctly examining the crime scene is up there with the feeling you get when you remember it’s a bank holiday and you’re getting paid early. Yeah, that good. 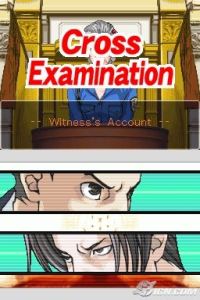 If this doesn’t get you hot and bothered then I don’t know what’s wrong with you.

The trial portion of the game involves you questioning witnesses at the stand, attempting to find lies in their stories. You have five exclamation marks in the top right of the screen, using one raises an objection, wherein you cross examine the witness by attempting to prove their story false using evidence you’ve found at the crime screen. Do this wrong five times and the judge will throw out the case because you’re being a sneaky little badger. This is why I said you should pay attention. Miss out on any detail and you may not know when to use a certain piece of evidence against a certain piece of testimony. Sound daunting? It is. Really my only issue with AA is that it’s very unwelcoming, and VERY heavily text based. There are times when you just can’t be bothered any more, simply due to the volume of thinking required for AA. That being said, winning a case is a real fucking air-punch moment. 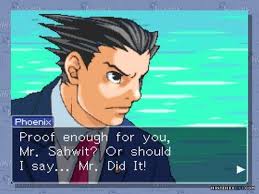 This game just gets me.

AA looks, and indeed sounds, like a stop motion Anime – whether you think that’s a bad thing or a good thing probably depends on your appreciation for the medium. Personally I have a schoolgirl crush on most things even remotely Japanese so I have no OBJECTIONS! HAAAAAAAAA! *gunshot*

Phoenix Wright : Ace Attorney is the very definition of a Marmite game – it’s not for everyone. However, it is for me! Highly recommended for fans of both Anime and point ‘n’ click adventures, Phoenix Wright offers a very real, very satisfying and very different challenge. Ace!

Pros : Really bloody clever, incredibly satisfying to beat, looks great, really funny in places and really sinister in others, it was made by Capcom – the one true game god.