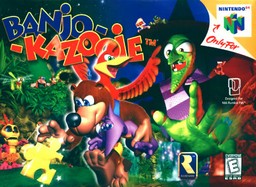 Rare certainly did love to bite the hand that fed them. Back when Rare were the sole property of Nintendo, everything they made was Nintendo-bait. They had a pop at cartoon racing (the awesome Diddy Kong Racing), they tried their hand at being Nintendo-esquely quirky (the awesomley difficult Blast Corps), and within a year of Nintendo releasing Super Mario 64 as their flagship 3D platformer, Rare released Banjo Kazooie. It’s no wonder they got sold to Microsoft. Ingrates. It’s pretty much an indisputable fact that SM64 is one of the best games ever created, so how did Rare get on with the formula?

You play as a bear called Banjo, on a mission to rescue your younger sister Tooty (seriously?), from the clutches of the evil witch Gruntilda (SERIOUSLY?!) with the help of your trusty sidekick Kazooie – a bird that lives in Banjos backpack. There was no recession in 1998, and as such, no excuse for taking up residence in a bears luggage. For shame, weird orange bird. Oh, and along the way you’ll get help from a voodoo shaman, the sensitively named Mumbo Jumbo, and your friend Bottles, a mole with milk bottle glasses. They’re mad those blokes at Rare. Properly wacky. 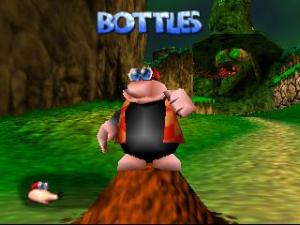 GET IT?! Ohhhhhh, how hilarity ensues.

BK plays very similarly to SM64, and in some ways actually exceeds Nintendo’s overbearing fun juggernaut. For a start, Banjo has an arsenal Mario can only dream of, thanks in large part to the moocher on his back. Kazooie can take over the legwork, able to run faster and over rougher terrain, and can also fire egg projectiles from either the front or back door. The story could’ve benefited from Kazooie being taken to the vet.

On top of that, the levels are MASSIVE, and due in large part to a wealth of collectibles are great fun to explore, something that can’t be talked of highly enough. If there’s nothing IN your levels and the collectables are purposeless, then your game is boring. And you can sodding well FLY! Not only that but it’s smooth and easy to control, something games specifically about flying can’t even manage. The boss fights are similarly fantastic, each drastically different to the last and all requiring you to use different weapons from your arsenal, as well as your ACTUAL HUMAN BRAIN.

The feel of BK is so authentic to the Nintendo ethos, you can’t help but feel it’s the game Nintendo would’ve made if they’d done a sequel to SM64.

OK, so BK looks great, FAR better than MK64. The levels are textured instead of just plain pastel colours, the animation is great, and there’s no fogging, no small feat given the N64s limitations in comparison to BK’s size.

And then there’s the sound. The horrible, horrible sound. Again, a blissful thank you to the storage space of cartridges, as instead of actual speech, the characters literally just babble over and over and over again until you’re compelled to write Rare a sternly worded letter, possibly attached to a brick and hurled through a window. The music is similarly infuriating, with many songs being composed of – can you guess? – banjos and kazoos. If you think that isn’t going to grate over time then you don’t deserve ears. Sadly, it all lends to the overly cutesy vibe that Rare cultivated for BK.

Banjo Kazooie was, and remains, an absolutely superb platformer. Stepping out of Super Mario 64’s gargantuan shadow was no easy feat, but Rare managed in with some tweaks to the SM64 formula, excellent level design, and woeful sound that belongs in the darkest pits of Hades. That aside, Banjo Kazooie truly deserves recognition as one of the all time great 3d platformers.

Cons: The unbearable cutesy-pooness of it all