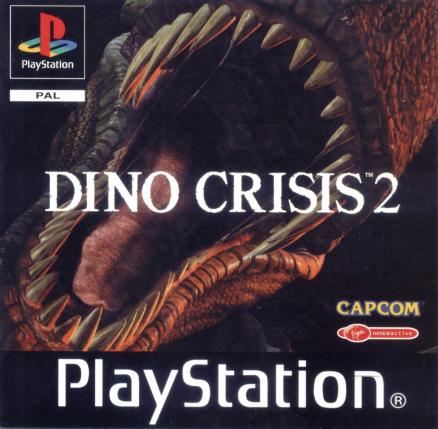 I complained about a lack of enemy variety, lack of boss fights, a VERY limited arsenal, and gave it 78%. And you know what? Dino Crisis 2 fixes those things. Within an hour of the game, you can have up to 8 weapons, you have fought 10ish varieties of dinosaur, and had what I think are boss with an Allosaur, and by the end of the game you get 5 mini game boss fights and some kinda of boss fights.

So, they took my advice, and fixed all the flaws I pointed out? What could possibly be wrong?

The game starts after the events of the first, Regina and Dylan (2 playable characters) travel in time (yawn) to find out why “Edward City” (terrible name) has been transported back in time?! Not sure why this is such a surprise, as you have clearly mastered time travel at this point to send Regina back/forward (not clear [it is at the end]).

You switch between Regina and Dylan at various points in the game, which is a nice feature, and do general shenaniganny things trying to figure out what the hell is going on.

Well… All the good things I mentioned in the last review, they broke them! The puzzles are shit, the fighting is redundant, and the awesome password/hacking system is missing!

Dino Crisis 2 is not a survival horror, rather than build on the concept, it made very strange changes and became an action game. Is is a little like going from Resident Evil 1 to 4, but not in the good way. Apparently, this was due to criticism that Dino Crisis 1 was just a Resident Evil Clone.

As I mentioned earlier, after an hour you have 8 weapons. What I didn’t mention is you effectively have unlimited ammo at this point! You see, you get “extinction points” for killing enemies. You get 100 points for killing a raptor, if you kill 2 in a row, you get another 100, plus 40 bonus points. 3, gives another 100 plus 60 points. Killing 3 in a row will give you 400 points. Ammo costs… 10 points! So… Killing 3 enemies, will take about 8 bullets, so, every time you kill a few enemies you more than triple your expendature. 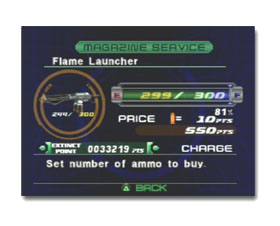 You dont even reload! You run around with 2000 bullets (10000 plus by end), never having to reload! So there is no risk, no fear. You are basically GOD after 30 minutes! If you kill more than 5 in a room and don’t take damage, you get 2000 bonus points (more depending on type/amount of enemy). So you really start to rack up points if you’re even the slightest bit competent. 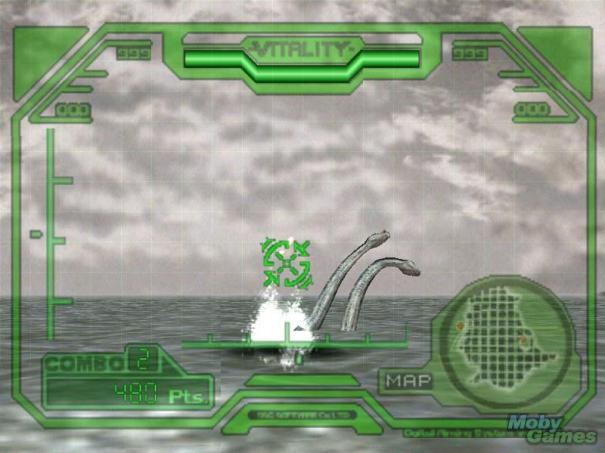 The above screenshot is a section in first person mode (good section), but you get 120,000 points for this section, and it is fairly early in the game!

Points come easily, and I am not being especially good. In one section you fight some Plesiosauruses (what is the plural of Plesiosaurus?), you get 400 points per kill, and from what I can tell, they can’t don’t attack you! They sit in the sea and move VERY slowly at you. The place you are most likely to get injured is by a door, when you turn to open it. So I usally, walk backwards, and just shoot a little, in case anything is there. In one room alone, I got a 15 combo killing Plesiosauruses. This gave me (with bonus) another 10,000 points. and each Plesiosaurus only takes 3 assault rifle bullets (3 points per round to buy)!!!

The puzzles are shite too, one particular buggy puzzle, requires you to chase a Compsognathus (Compy), that has stolen your keycard. You have to funnel it through some slats in the wall, and lock the slats behind it. SLOWLY pushing to a cage. It is a nice idea, it is let down by bad path finding and shonky AI (Been trying to find a way to get shonky in this review) there doesn’t seem to be a logic to the direction the compy runs, so you just run around a room for 30 minutes hoping it will go the right way.

Other niggles, such as having to go to your inventory, and selecting the key to open a door is a ballache. It is pointless, and it breaks the immersion a little, and the back and forth key fetching is annoying, but nothing to onerous.

Ok, fine you hate it… why play it?

You know what, it is still fun, it is mindless fun, but fun. If you look at this as a sequal to a survival horror game, it is inferior to the original. If you look at it as a standalone game, then it is actually really good, perhaps better than the first Dino Crisis.

Dino Crisis 2 was released late in the PlayStations life, this means the developers have eeked EVERYTHING out of the console. The backgrounds are lush/vibrant and really pleasing to the eye. The forests are just lovely, the volcano section is amazing! Seriously, the lighting effects, the glow, and the detail in the lava flow is exceptional, I can’t think of a game that has done lava so well! The camera transitions are instant, the door opening sequences are quicker, and the fighting is constant (some rooms never ending). 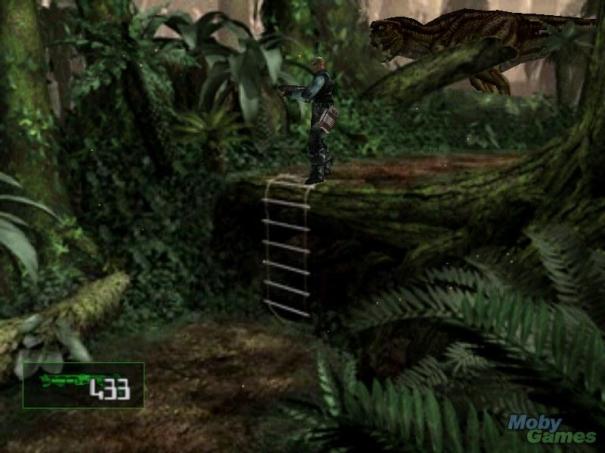 The amount of enemies is good, there can only be 3 on screen, but they respawn from multiple angles fairly instantaneously. You can rack up 30+ combos later in the game and the combat just fits. I criticised the lack of reload, but it does add a constant flow to the fights, since the dinosaurs never let up, you’d die pretty quickly if you have to stop for 10 seconds to reload your shotgun. So all in all, I understand the changes, and despite my initial scepticism .

Ultimately, you have to consider this as a reboot or new game, rather than a direct sequel. If you can get your head around that you’ll like this game.

Basically, this pros and cons are the opposite from Dino Crisis 1, and some how this makes it better!