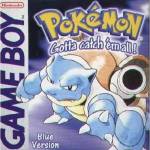 Do you want to be, the very best
Like no one ever was?
To catch them is next to impossible,
as you have to buy three versiooooons
Pokémon!

Firstly, go listen to this PowerGlove version of the theme, I’ll wait while you do…

I had never played Pokémon, and I only ever watched the first season of the cartoon!

Sorry, that isn’t even true, I gave up around the 60th episode, because it was pretty boring and formulaic.

What is worse, this makes me the most qualified to review Pokémon Red out of the four of us that currently write for this site.

Anyway, on to the game.

This game really showed the power of the Gameboy! I slagged Kirby off for having nothing to it, and I am justified, there is literally 10-15 minutes of play time in that game. It took me 15 hours just to get the 4th badge, and finally defeated the Elite Four after 28 hours. If you want to catch all, trade and level eveything to level 100, then you’re talking 100 hours+ game time. This is around the time it takes me to 100% Final Fantasy 7, 8 or 9, so there is a lot going on!

Pokémon Red follows the first season of the cartoon quite closely, you fight the same people, in the same gyms, and do stuff that generally happened in season 1, thankfully without that sodding Team Rocket motto, without Pikachu and Ash doing nothing but FAIL, or the creepyness of Misty.

You can buy Red, Blue,and Yellow versions of the game. While they play the same, you do get specific items or Pokémon that only appear in that particular version. So, if you are an achievement hunter and you actually want to collect them, then you need a friend (or 2 Gameboys and each cartridge) with the different version to you, a link cable, and somebody willing to trade you their Starter Pokemon.

Personally, I don’t care for collecting them all, but each to their own.

You will try to complete the game with your 6 f avourite Pokémon Blastoise/ Haunter/ Dugtrio/Psyduck /Pidgeot/ Pikachu, but the game won’t let you… You need a balanced team, and they need to be fairly high level to withstand the punishment of the Elite Four’s Pokémon.

In the end, I had to compromise, and this is the team that beat the Elite Four, and the final “secret” boss. 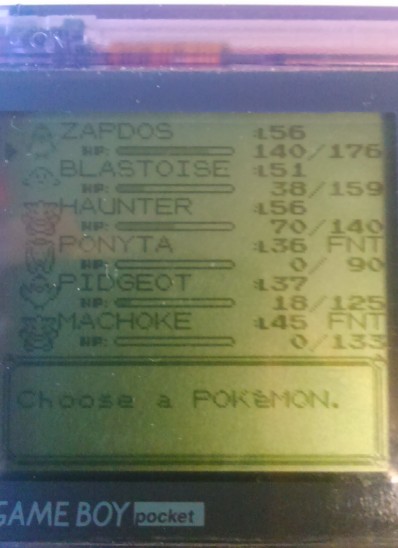 The difficulty seriously ramps up, you get to the Indigo Plateau, and all of a sudden everything is level 50-60! All my Pokémon are 40-50, so it was strange to suddenly be completely out of my depth. It is as this point the game stops being fun, and becomes a bit of a chore which leads to…

What I don’t like is that I then had to spend 3-4 hours just grinding battles: everything gets tiresome with grind. I have done all the trainer battles, so it is just random encounters.

You only get money in trainer fights, which means, other than leveling/catching, you achieve nothing for random encounters (you can cheat, or use PayDay bug). This results in me being too poor to afford Pokéballs, and unable to buy vital potions for the grind.

When you get to the Elite Four, you will lose the first few times, and realise you have to grind to level your Pokémon. Since you have no money, and no real way to earn money, you have to grind the Elite Four, which basically entails defeat the 3 you can, get 16k. Die (and lose half of the 16k), then buy some Pokéballs/potions, so I can try and catch the other legendary birds. But this really is a ballache.

Once you beat the Elite Four, it suddenly becomes easy again. You get 30k for beating the Four, plus the final boss. So you can just repeat this over and over, but getting there is a pain. From the screenshot above, you’ll be able to see that I have a strange mix of levels (56/51/56/36/37/45), this just gets more and more stupid as you go. I have (at time of writing) beaten Elite Four 3-4 times and now the 54’s are at 60, but the 30’s are still in mid 30s, because they’re shit, and you can’t do ‘owt with them as they’re one shot whenever they are used.

A smaller niggle is some of the potions are not as obvious as the name suggests. Prime example; “Full Heal”! God damn fucking FULL HEAL! I keep buying these thinking they are healing potions! But NOOOOOO! They just remove all status effects!!!

Oh, and catching the Legendary Pokémon, take Articuno as an example… You have to paralyse him, and put him to sleep, AND get him to danger energy. Once you do that, you need about 40 ULTRA Pokéballs to finally catch him, and they ain’t cheap… 1200 a pop! It just isn’t fun to do, and since the only way to grind money is the Elite Four there isn’t much enjoyment in trying to grind.

What is good then?

Basically everything else! I am not a Pokémon fan, but the game is really fun. If, like me, you somehow missed this game, or were thinking of revisiting it, I seriously recommend it. You will form a bond with Pokémon, and no matter how much you love Psyduck, you’ll cry when you realise he is a useless piece of shit that can’t do anything, and thus has to be replaced.

It is a Gameboy game, so the graphics are basic, but even with the basic graphics, it sucks you into the world, that you feel part of.