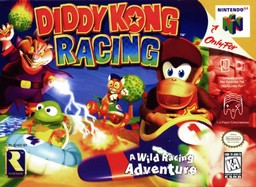 Everybody had this really ill-advised idea back in the late 90’s that they could create the fabled ‘Mario Kart Beater’, and – knowing everybody loves a trier – some are still having a crack at it today (Sega actually had a pretty damn good stab at it!). One of the earlier attempts was Rare’s ‘Diddy Kong Racing’, a new franchise based on a character that Rare shoehorned into Donkey Kong Country, beloved by approximately nobody. Great idea, right? Turns out, yes.

Your mission is to choose from a host of – frankly really fucking weird (including Banjo of Banjo-Kazooie fame and Conker before he fell off the wagon) – characters who have banded together in order to save Timber Island from the evil Wizpig, who, sadly, turns out to be a giant pig, and not a 70’s keyboard based Prog band. For some reason this is accomplished via kart racing. That’s dictators for you.

Diddy Kong Racing does feel awwwwfully familiar, but not in a bad way. The fact that DKR plays so similarly to MK64 works in it’s advantage – everyone knows how to play Mario Kart, resulting in DKR being an easy pick-up-and-play game for a first timer. You know the standard drill – 8 guys on the course, beat them by essentially cheating with a variety of aggravating weapons. In a kart. OR – in a hovercraft. OR IN A PLANE! They don’t work as smoothly as the karts but the variety breaks up any monotony in a long session.

A nice touch to DKR is the way weapons work – different coloured balloons yield different weapons/powerups – blue for boosts, yellow for shields, green for droppable obstacles, red for missiles. The major difference here is that saving your weapon and picking up the relevant colour of balloon again powers your weapon up further up to 3 times. This adds a subtle layer of strategy as you hold your cards close to your chest with the hope of a greater reward down the line, as well as making this a cartoon racer wherein *gasp* racing skill actually matters! If everybody is waiting for a better powerup, the volume of random crap flying around the track is minimal in comparison to MK64, meaning no cheap lightning bolt victories for your skill-challenged friends.

DKR can stand head and shoulders above MK64 in one aspect for sure – the single player mode is fantastic. It’s an open world hub where you drive through doors to the next race. You unlock doors by collecting balloons. You collect balloons by winning races. Beat all the races? BOSS RACE! This depends on who you ask, but I love these awkward little experiments. You have to race against a giant fucking thing – walrus, octopus, you know, the standard stuff – on a one off track made just for the battle. They’re all excruciatingly fast so the races becomes exercises in patience and timing with your arsenal. Beat the boss? Next world! Beat all the worlds? Mirror worlds! Done those? Coin hunts! I could go on for a while… The coin hunts require you to grab silver coins hidden around the track and then still win the race as well. They’re horribly difficult, mindlessly addictive and immensely satisfying. There’s an absolute tonne of stuff to do, and the open world system allows for you to do something different if a track has you stumped.

Here’s the bad stuff. The multiplayer does all the same stuff that MK64 does – and then some. It’s just not as good. Reason being? There’s about 3 decent characters in DKR, 2 of which are secret unlockables (the majority are almost unplayable due to shoddy handling). It proves fairly earth shattering for the multiplayer, as somebody invariably ends up with the shit end of the stick and loses. And that’s not fun. The battles modes are an admirable but misguided attempt to do something different. The battle modes involve weird little tasks like moving eggs out of a volcano and into your respective nest, but the tracks are all too small, leading to a lot of face-planting into the wall and not a whole lot of excitement.

Classic early N64 – big, bold and colourful, replete with blocky character models* and tracks that reveal themselves as slightly bland and empty when examined closer. It still runs perfectly smoothly, and just writing this review has gotten the soundtrack stuck in my head all over again.

*Timber, however, is the stuff nightmares are made of…

WHAT’S WRONG WITH HIS EYES?!

But is DKR better than the illustrious Mario Kart 64? Yes and no. The superb single player absolutely trounces the complete lack of anything put forward by MK64, but it’s let down by poor character balancing and a dull multiplayer. It still plays really well today, and the single layer is a challenge not to be missed. Highly recommended.

Cons: Timber has the eyes of a serial killer, Multiplayer can’t compete with the king, Most characters handle like shopping trolleys, Cutesy pre-swearing Conker