There is nothing here. Literally.

OK, maybe figuratively, but the game is sparce. You get 8 real wrestlers, plus “yourself” and 3 fight modes and, a kind of career, but it is oddly a little hidden.

To do the career, you need to select “Yourself” and then you’ll fight all other wrestlers in order how how popular the wrestlers were at the time (SPOILER: Hulk Hogan and Ultimate Warrior are last). There is no attempt to shoehorn in a story, you just fight people in a row, one after another. It isn’t great, but it is standard for this era.

There is multiplayer, and 3 match “types”, you get to play: 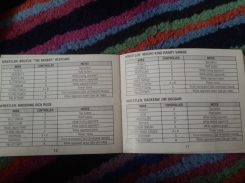 The move set is BASIC! Punch, 1 forward grab, 1 back grab, a strong attack, a turnbuckle move, and a running move. Not everyone gets every move type, and each wrestler has slightly different attacks (so there is a little bit of variety).

The game is actually fluid and responsive, the animations are good and the sprites recognisable (even on the wrestlers time forgot).

You both get health bars, and when your health is empty, you’ll get pinned. All very simple.

A bigger wrestling fan will have noticed earlier, but for the first 30 seconds of your fight the opponents entrance music plays (I only noticed when Real American was playing), they are actually pretty good so plus points for 8bit Real American/Warrior Wildfire. You’ll then get “generic game music”, but it is a nice touch, so I won’t be overly critical.

This is bad, but not terrible. It succeeds in some areas, and lacks in others. I had originally written this with the intent of giving it 20%, but I thought I’d go back and play it again. It did improve.