I was surprised about this one, as a kid it was a frustrating ballache, with many a tantrums thrown at its behest.

I couldn’t remember if it was a good game though. Just because I sucked at it as a child doesn’t mean it sucked.

So, has father time been fair to it?

There is a surprising amount of depth to this game, and it should be given a lot of credit. Golden Axe and Streets of Rage are usually held up as being the pinnacle of side scrolling beat ’em ups, but I honestly think this game is better than those two on the whole.

Firstly, the variety in levels! People always mention the variety in a game, but this usually means you play in a “green level” an “underwater level” an “icy level”. In Double Dragon 2 there is ACTUAL variety.

Level 1 is just fighting, with a few ladders, and an instadeath drop to prepare you for later.

Level 2 introduces basic platforming, and a FREAKING helicopter shooting at you.

Level 3 is short and sweet, you’re in the helicopter! As long as you don’t get sucked out the door, you’ll be OK. But beware, this isn’t as easy as it sounds.

Level 4 introduces spiked ceilings, preventing you from spamming the twirly kick. This forces players to learn new tactics, and hone their skills. The level finally ends with this escalator jump, which was responsible for an awfully large amount of adolescent ragequits. (If you go to the platform below conveyor belt, you can easily jump…)

Level 5 is much the same as 4, but with a little ledge jumping above instadeath lakes.

Level 6, well level 6… This is the first true platforming section. And it is the devil! It is short, but the disappearing ledges are a BASTARD.

Finally (well 2 more levels, but I’m too shit) level 7. You start on an escalator, have to split second jump onto a reverse conveyor belt, and then leap onto a mini conveyor. I died here 4 times, and have not made it back since.

Well why play it then?

You might be wondering “what sounds good about this?” Well, the game is training you, the difficulty curve does start ramping up, but you learn all the required skills as you go along. There are MANY cheap and frustrating deaths, but the game is relatively short (Takes me 20 mins to get to level 7), so it doesn’t take too long to get back to where you were and try again.

You only get 4 lives and there are no continues, and you don’t get any extra lives. So, to complete the game you need to be perfect.

This is an issue, as the platforming is a WEAK, and you’ll fall through some ledges. In the photo below, I fell throw the 2 piece ledge 3-4 times, because I didn’t land right on the black line in the middle. 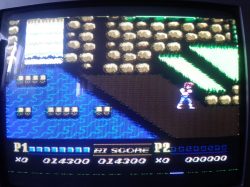 The jumping isn’t great either, it is not as responsive as a Mario/Aladdin/Mega Man. And it is freaking annoying. You do get to instantly respawn, which is nice…

EXCEPT sometimes it isn’t… You can respawn in really awkward places, on the conveyor belt, next to the throw happy boss near a ledge… This means you can get stuck in a loop of death respawn/death respawn…

There is a surprising amount of depth in Double Dragon and its move set. In Streets of Rage, Golden Axe, Final Fight et Al, it is usually punch/jump/special. On a 2 button NES game you:

A attacks left, B attacks right. A&B is jump, A&B while in the air does the special spinning kick. You can time a special attack when you jump and land, either doing a powerful uppercut (A or B), OR you can do an awesome flying knee atatck (A&B) this’ll send any enemies hurtling to their deaths.

You can also grapple with them, getting some cheap shots in, before tossing them over your shoulder.

The MANY joys of instadeath

The various Instadeaths I came across in my play throughs…

And I can’t get further than this, yet.

On one play through I got to the mini-boss on 5 and he threw me off the ledge, respawned, he threw me off again. The BASTARD did it 4 times!!! I was stuck in a loop and couldn’t get out of it.

Double Dragon 2 is an alright game. It is difficult, but it is fun in bursts.

However, some fundamental platforming flaws takes a serious amount of points off the final score.

Cons: Instadeath… LOTS of Instadeath, No continues, adolescent ragequit, the platforming is TERRIBLE.