Let us start by first diffusing a popular myth – the Attitude Era of wrestling was garbage. It really was. Granted, the main event was always a spectacular sight to see, and there was no shortage of colourful characters…but for every Stone Cold Steve Austin, there was a Steve Blackman. For every Chris Jericho, there was a Chaz. For every Rock/Austin epic, there was a 20 minute clusterf*ck of skinny fat guys falling all over each other in their quest for a broken belt that changed hands 800 times a night.

To objectively take a look at the seminal WWF No Mercy for the N64, it’s important to discard these rose tinted glasses. We’ve ripped off that plaster for you. I know it stings, but it’s for the best. Would you like to lie down for a minute? Have a beer, it’s what Austin would want. So, to the crux of the matter, WWF No Mercy, is arguably the greatest wrestling game ever made. Here’s why.

No Mercy was the last hurrah of sorts for AKI Corporation, a company previously known for the Virtual Pro Wrestling and WCW games, and the last ‘true’ wrestling game they produced before they began creating hideous beat em up mishmashes starring every rapper you’ve ever hated. As a result of the time spent creating wrestling games, No Mercy emerged as a fine tuned machine, taking all the elements that made the previous games successful, before adding little touches and flourishes to make No Mercy nigh-on perfect.

Simple but effective. Easy to pick up but hard to master. Cliches, yes, but undeniably true of No Mercy. You have a button to strike, a button to grapple, the d-pad, a button to run and a counter button. That’s it. The beauty of the game comes from the pacing – holding a button down does a strong attack. Not done enough damage? Expect it to backfire. Button mashing? Expect to get countered. It’s about timing, capitalising on mistakes and tactics. The slower pace of the game when compared to the kicky stompy go go go of the Smackdown series almost subconsciously instills method in your madness. Smackdown is an X-Division showcase from 2004, No Mercy is a Dory Funk/Ric Flair wrestling clinic. New additions to the series include the ladder match – which are a multiplayer dream, and the oh-so daunting Gauntlet mode. Pinfalls, Submissions, K.O, and over the top rope all count here, you’re entrant number 1, there’s over 100 other wrestlers….Go!

No Mercy’s Story Mode is nothing short of glorious…ok, maybe not for the reasons AKI and THQ are hoping (more on that shortly), but it really is. The setup is fairly basic. You chose a wrestler, choose a championship to vie for, you’re given a match and off you go. The variety comes from the fact that matches are set like missions – some are a must win, some you’re allowed to lose, and the story alters accordingly depending on what you do. A lot of the storylines are lifted straight from 1999/2000 era WWF – at some point in your journey you are likely to realise you’re playing as Triple H or Cactus Jack almost word for word without actually playing as them. It becomes a compulsion to try out all the different avenues of the story, purposefully losing matches to see where your shame will take you. The ironic hipster in me also loves this mode for the bad Japanese to English translations and the fact that most matches begin with somebody (usually TAKA Michinoku) walking up behind you, telling you they’re going to kick you up the arse, and then KICKING YOU UP THE ARSE. 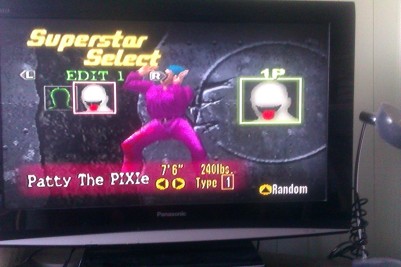 Rather tellingly of we wrestling fans, the most popular mode of most games of this ilk seem to be the various creation suites, and No Mercy delivers with a wide array of perma-stuck faces and hairstyles to satiate even the most ardent grown man who likes to play dress up. Job one is always to create a buff version of yourself until all your friends laugh at you, and then job two becomes thinking up your own wrestling name. The rivalry between Apocalypse Wow and Patty The Pissed Pixie rocked the WWF to it’s very core, and to date has headlined 327 Wrestlemanias. Who the hell is Hulk Hogan? A quick and vicious booing to whomever decided the entrances should be cut short before the wrestlers hit the ring, but this was a cartridge game made back in 2000, so we’ll allow them some leeway.

Ohhhh that menu music… “Is cooking…*dumdum dum dadum*…is cooking…” Yeah, I’m not going to be sad if I never hear that again. The graphics adhere to the same blocky, frozen faced, lego-men-made-of-meat that ran rampant throughout this game engine, but the colours are bolder, the animations are better, the environments are more layered, the crowd has more character…good show all in all really.

I’m cutting this short. I have to. This could quite easily turn into the foundation for a college course about wrestling game history. But the important points to consider : the gameplay is a barrel of fun, the multiplayer is a laugh riot, everybody (for some reason) loves these wrestlers, and the replayability is endless. We mean that. We played this game for 10 years and still never unlocked the Godfather’s Ho as a playable character. And smart money says that she had some tricks.

WWF No Mercy has proved to be so relentlessly playable that other wrestling games are still ripping it off today (we’re looking at you, TNA Impact!). An absolute jewel in the N64’s already weighty multiplayer crown, and not to be missed by anybody, wrestling fan or not.

Pros : Playabilty for years, Huge character roster, Wide variety of modes to enjoy, Excellent creation suite, That *ding* whenever you smash somebody in the plums.

Cons : FUCK OFF, TAKA!, Occasionally vexing AI, No real entrances (these things are important) Has anybody ever actually unlocked the Ho?, My copy of this game is now broken due to exhaustion.